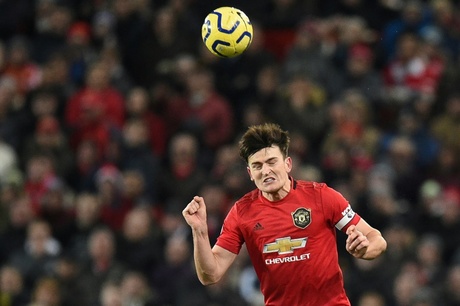 Harry Maguire is frustrated that defensive lapses are costing Manchester United crucial points after they let slip a winning position for the second consecutive match against Aston Villa.

Ole Gunnar Solskjaer's side were leading 2-1 midway through the second half at Old Trafford on Sunday before a Tyrone Mings equalizer forced them to share the points.

The 2-2 draw left United in ninth place in the Premier League with 18 points from 14 matches, their worst return at a similar stage since 1988/89.

United also conceded a late goal in the previous week in a 3-3 draw against Sheffield United after storming back from 2-0 down to lead 3-2.

"We got ourselves in a great position in the second half (against Villa) and again conceded a sloppy goal really," Maguire told MUTV.

"As a defender especially, it's frustrating," he added. "We haven't really conceded many chances or goals prior to the last two games and then we've conceded five."

Jose Mourinho returns to Old Trafford for the first time since he was sacked a year ago with a resurgent Tottenham side on Wednesday before United make the short trip to neighbors Manchester City at the weekend.

Solskjaer has to find a way to turn draws into wins, having managed just six victories in 22 league matches since being appointed permanent manager in March.

Maguire believes the quick turnaround from Sunday to Wednesday could help United after their recent disappointments.

"It's perfect. When you don't win any football match you want a game as soon as possible to put things right," he said. "And there's no better way than to play Tottenham here at Old Trafford."