Biden Evokes Past, Raises Doubts with 'No Malarkey' Rallying Cry 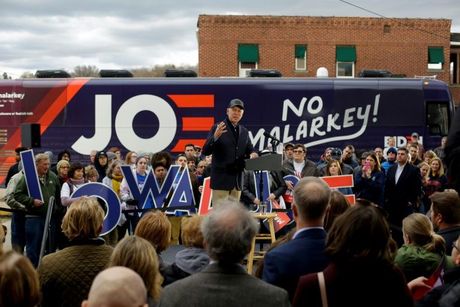 When Democratic presidential hopeful Joe Biden said he was fired up to barnstorm Iowa on an old school bus tour dubbed "No Malarkey!", a Republican congressman was ready with a cheeky response.

"OK boomer," Matt Gaetz, who at 37 is less than half the former vice president's age, tweeted Sunday.

The jibe may have been a cheap shot at Biden's age -- at 77 he is a few years older than even the Baby Boomer generation that Gaetz referred to.

But it spoke to the campaign's strategy of using old-fashioned charm and "Iowa nice" to woo voters in the battle to see who will challenge President Donald Trump for the White House.

Biden is the national Democratic frontrunner, although he trails Indiana mayor Pete Buttigieg and two other rivals in Iowa.

Polling shows Biden is struggling to connect with the young voters he desperately needs if he is to claim the 2020 nomination.

At a rally in Council Bluffs to kick off the eight-day, tour through the state that votes first in the nomination process, Biden defended his "aptly named" bus as a contrast to Trump.

"The reason we named it 'No Malarkey' is because the other guy's all lies," Biden said.

Signage and stickers bearing the rallying cry were handed out by the campaign. The word's definition -- "insincere or foolish talk" -- is painted on the bus itself.

Some voters were unimpressed.

"Please send whoever came up with this campaign slogan back to the 1950's," wrote one Twitter user.

Biden insists America's folksy center will determine who wins in 2020, and he accuses Trump of denigrating U.S. values.

"Our national character is literally on the ballot this time around. Our children are listening," Biden said in Council Bluffs.

The term is nothing new to Biden, who used it repeatedly as a senator.

In 2012, he memorably attacked his challenger Paul Ryan in their vice presidential debate, interrupting the Republican to say: "With all due respect that's a bunch of malarkey."