Bassil: Govt. Success More Important than Our Presence in It 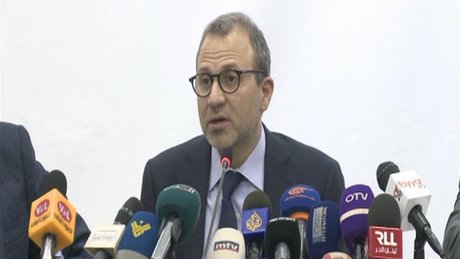 Free Patriotic Movement chief Jebran Bassil on Tuesday announced that the success of the new government is more important than the presence of his movement in it.

“If some believe that our presence in the government would prevent salvation or impede the electricity plan, we are willing to stay outside it,” Bassil said after a periodic meeting for the Strong Lebanon bloc.

“Nominating a premier, our participation in the government and granting it our confidence depend on how much it can be successful,” he pointed out.

“We cannot imagine the presence of a government that would stand idly by towards corruption,” Bassil added.

Noting that the FPM wants a government in which it can place its confidence, the FPM leader said he wants the new government to succeed in boosting the economy and preserving security.

“We hope that we are nearing a happy ending and the president is using his powers wisely and calmly,” he said about the ongoing talks to name a premier-designate.

“From the beginning, our demand was the formation of a government of technocrats with political backgrounds but this demand was not accepted,” he reminded.

Bassil also stressed that “the formation of the government is a priority in order to relaunch the economic cycle.”

“We are not obstructing but rather facilitating the formation of the government to the extent of self-elimination,” he said.

Bassil added: “We are not clinging to seats but rather to fighting corruption.”

Noting that the new government will respect the National Pact in its structure, the FPM leader stressed that “no one wants to eliminate the other.”

He added: “We have borne a lot of false accusations and remained silent in order not to obstruct the situation and in order to end the state of the absence of a government to move to another stage in which work would begin.”

“From the beginning, our demand was the formation of a government of technocrats with political backgrounds but this demand was not accepted,” he reminded.

So why weren't the FPM Ministers Technocrats? Is it baba Aoun who refused? No one else can refuse!

Such a load of BS!

“If some believe that our presence in the government would prevent salvation or impede the electricity plan, we are willing to stay outside it,” Bassil said
Duh yes please!