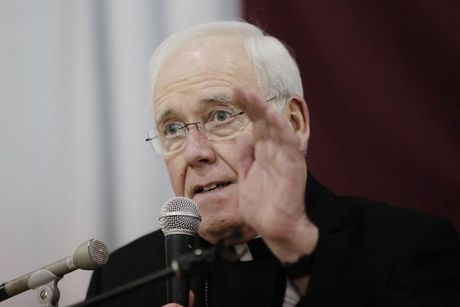 A U.S. bishop accused of trying to cover up sexual abuse by priests quit on Wednesday, as the Catholic church continues to be rocked by a worldwide clergy abuse scandal.

The Vatican said in a statement that it had accepted the resignation of Bishop Richard Malone, 73, from the Buffalo diocese in New York state.

Malone has been accused in US media of hiding the names of accused priests and of allowing some to remain in the ministry.

He admitted last year that he had "fallen short" in his handling of allegations of misconduct, particularly by priests accused of abusing adults.

Buffalo has been in turmoil since February 2018 when a retired priest admitted to sexually abusing children, sparking further allegations across the diocese.

The Church has already paid $17.5 million to victims, according to the Buffalo News, which says that more than 220 lawsuits have been filed by people claiming to have been abused by priests.

Most of the allegations date from before 2002 and some date back more than 70 years.

Malone, in his post since 2012, announced he was retiring two years early, explaining that Catholics in Buffalo would be "better served by a new bishop who perhaps is better able to bring about the reconciliation, healing and renewal that is so needed."

"I have acknowledged on many occasions the mistakes I have made in not addressing more swiftly personnel issues that, in my view, required time to sort out complex details pertaining to behavior between adults," he said in a statement Wednesday.

He is alleged to have kept hidden files about abusive priests to minimize damage to the church. Malone was also reportedly recorded expressing reluctance to sack one priest accused of abuse.

In a brief communique, the Vatican said Pope Francis had accepted the resignation of Malone and offered no further detail.

Activists welcomed his resignation but criticized the Vatican for not directly firing him.

"He actively did try to cover up and minimize cases of abuse in Buffalo and that's something that can't be allowed or tolerated," Zach Hiner, executive director of SNAP, a non-profit helping survivors of abuse by clergy, told AFP.

That Pope Francis accepted his resignation but didn't publicly force him to stand down sends "a weaker message," Hiner added.

The Catholic Church has been rocked by thousands of reports of sexual abuse by priests and accusations of cover-ups by senior clergy, starting in the Boston archdiocese in the United States in 2002.

An August 2018 grand jury report examining child sex abuse within six dioceses in the state of Pennsylvania found more than 1,000 child victims, underscoring the scale of the problem.

Since the crisis became public in the 2000s, the U.S. church has spent more than $3 billion in settlements, according to abuse tracking site Bishop Accountability.

Malone's stepping down follows other resignations, including of auxiliary bishops in New York and Los Angeles.

The bishop of Albany, Edward Scharfenberger, will take over in Buffalo until a new bishop is named.