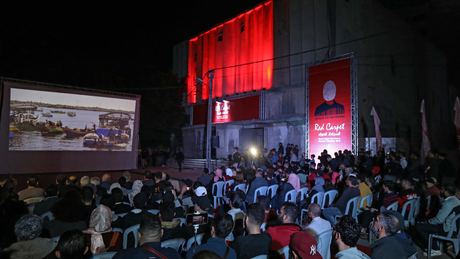 In the Palestinian enclave of Gaza, without a cinema for 30 years, a few hundred people walk the red carpet to a rare film screening -- held on the street.

The opening of the Red Carpet Human Rights Film Festival on Wednesday evening had been expected to take place inside the Amer Cinema, which has been abandoned for three decades.

But it was moved at the last minute in unclear circumstances, with a screen erected in the street outside the cinema, a grey building with the letters peeling off.

The festival's executive director, Muntaser al-Sabaa, said organizers had been told by the cinema's owners that they could no longer use it as a venue.

"Suddenly they told us: 'We are sorry but the situation is dangerous'. They said: 'We are afraid'.

"What happened is incomprehensible. We don't know who told this partner to block the permit to open the cinema."

The organizers said that they had obtained the necessary permits to host the festival in the cinema.

The Gaza Strip is run by Islamist movement Hamas, which enforces rules based on a strict conservative interpretation of Islam.

Since seizing control in 2007 they have prevented events they consider immoral. The interior ministry in Gaza did not respond to a request for comment.

The week-long festival was scheduled to show 45 documentaries and is part-funded by the Palestinian Authority, based in the West Bank and dominated by the rival Fatah movement of President Mahmoud Abbas.

"We chose Amer cinema for its strong symbolism and to send a message that cinema buildings still exist in Gaza and people have the right to enjoy shows," Sabaa said.

The enclave of two million people has not had a working cinema since the last ones closed during the first Palestinian intifada, or uprising, in the late 1980s.

Gaza is still recovering from the last of three wars between Hamas and Israel in 2014.

In the end around 200 people sat outside to watch the opening film, the documentary "Gaza" by Irish directors Andrew McConnell and Garry Keane.

The film, which documents the lives of a number of Palestinians over several years, has won critical acclaim.

With a chill in the air, at times the audience clapped, while others looked saddened by the tale of daily woes in the Israeli-blockaded territory.

"I came with my wife and daughter to watch," said Fathi Omar. "I was hoping to see the opening film on the screen (inside).

"When we travel to Egypt, we go to the cinema to see the new films. The cinema has a unique feel.

Actress and theater director Dania Ziara said that she was happy that the screening had gone ahead.

"But I would have been even happier if the show was in the cinema. In the street it is very noisy."

Jonathan Conlon, representative of Ireland in Palestine, told AFP it was "very special to attend the screening of a film made by two Irishmen who were able to overcome so many obstacles to complete this extraordinary documentary of life in Gaza.

"More than anything, I think, the film shows the great humanity -- and the hopes -- of ordinary Gazans."

If Hamas would have diverted just a very small percentage of the millions (of whatever currency you can think of) that flow into their pockets every year, and go to the production of rockets and arms, then there would have been enough money to renovate that cinema.