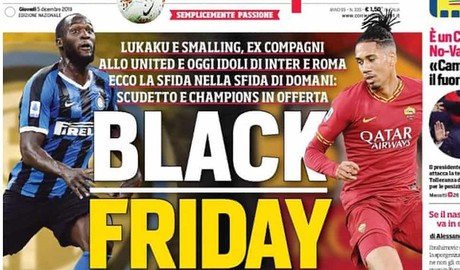 Italian football clubs on Thursday slammed a renowned sports daily's front page as "unacceptable" and "terrible" after it used "Black Friday" in a headline in reference to Romelu Lukaku and Roma defender Chris Smalling.

The article praised the two players for taking "strong positions against racism and are the symbols of the two clubs", but Roma tweeted "not a single soul" would think the headline a good idea.

The club's chief strategy officer Paul Rogers told AFP the choice of headline was "terrible" although the article itself was "positive".

Racism is a recurrent problem in Italian football, with several black Serie A players having suffered racial abuse by supporters in the first months of the season.

"The intention of the newspaper article was actually positive but this headline has totally overshadowed the anti-racist message contained within the story," Rogers said.

"Unfortunately, as we've seen on social media, more people will see that ill-judged headline on the front page than read the actual article and it creates new issues at a time when we are all trying to tackle the issue of racism in Italian football."

"It is totally unacceptable to see such casual ignorance on racism," tweeted AC Milan.

"We will not stay silent on this issue... superficiality and ignorance on the subject of racism are no longer tolerable."

Inter Milan said "football is passion, culture and brotherhood. We are and will always be against all forms of discrimination."

"White, black, yellow. Denying difference is the typical macroscopic stumbling block of anti-racism racism," it said in an editorial.

"An innocent headline... is transformed into poison by those who have poison inside."