From Crimea to Trump, Five Things to Know on the Ukraine Conflict 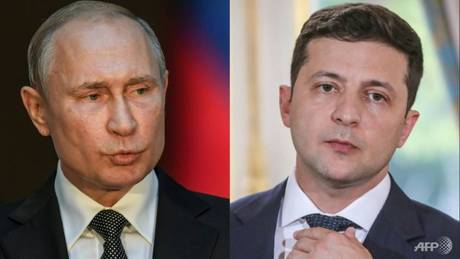 Monday's summit aiming to end the conflict in eastern Ukraine will see Russia's Vladimir Putin face off with Ukraine's Volodymyr Zelensky for the first time.

Discussions between the two leaders, mediated by the French and German heads of state, will address five years of fighting that has left 13,000 dead and seen Moscow's ties with the West plummet to lows unseen since the Cold War.

From the first appearance of armed Russian special forces as unidentified "green men" in Crimea, to the deaths of hundreds in a Boeing downed in Ukraine's sunflower fields, to the impeachment scandal stemming from Donald Trump's telephone call with Zelensky, here are five things to keep in mind during the talks.

In February 2014, days after the Euromaidan revolution led to the flight from Ukraine of pro-Russian president Victor Yanukovych, mysterious "little green men" without insignia appeared in Crimea.

Armed to the teeth, they were instrumental in taking control of institutions, military bases and transportation hubs in the Black Sea peninsula in southern Ukraine.

The Kremlin originally denied any involvement, with Putin suggesting advanced weapons could be purchased in army surplus stores.

But after the peninsula's annexation was formalised, Moscow admitted the incognito commandos were Russian special forces.

Encouraged by Crimea's experience, pro-Russia separatists began to take over towns and tear down Ukrainian flags from government buildings in industrial eastern Ukraine.

Separatist leaders, mostly fringe figures before the unrest, declared independence from Kiev and announced the creation of the Donetsk and Lugansk People's Republics.

Sporadic clashes between government forces and separatists escalated into a full-blown war in May 2014.

According to Kiev and the West, Russia fuelled the conflict by pouring arms and troops across the border, which Kiev no longer controlled.

Russia denies involvement, saying the conflict is a "civil war".

In July 2014, a Malaysia Airlines flight from Amsterdam to Kuala Lumpur was hit by a Russian-made BUK missile over rebel-held territory, killing all 298 people on board.

Wreckage and body parts rained down on sunflower fields near the village of Grabove.

According to international investigators, the missile was transported to Ukraine from an anti-aircraft brigade based in the Russian city of Kursk.

The probe has so far shown possible involvement of key Kremlin officials, including the defence minister and a top aide to Putin.

Moscow dismisses the accusations and has offered an array of conflicting theories, including that the Boeing was shot down by a Ukrainian fighter jet and that the BUK missile was Ukrainian.

Ukraine's Western allies in 2014 approved damaging sanctions to punish Moscow for the annexation of Crimea and allegedly funnelling military and financial aid to the separatists in eastern Ukraine.

The European Union and the United States imposed asset freezes and travel bans against Russian and Ukrainian officials, affecting hundreds of individuals and dozens of companies.

More sweeping sanctions -- targeting Russia's oil, defence and banking sectors -- were introduced after the shooting down of MH17.

As a tit-for-tat measure, the Kremlin banned some Western imports, including food products like European cheeses, in 2014.

In recent months Kiev has found itself in the crossfire of US domestic politics, triggered by a conversation US President Donald Trump had with Zelensky on July 25.

Trump is suspected of putting pressure on Ukraine to launch investigations against his political rival Joe Biden and his son Hunter, who was on the board of a Ukrainian gas company, ahead of 2020 polls.

The key issue is whether Trump was holding back promised US military aid crucial for Ukraine until the Bidens were probed.

Zelensky has repeatedly denied that the conversation with Trump described such a quid pro quo scenario.

Washington has been a key ally of Ukraine against Russia, and the scandal has left Zelensky struggling to maintain bipartisan support for Ukraine in the US.