Greece on High Alert on Anniversary of Teen Shooting 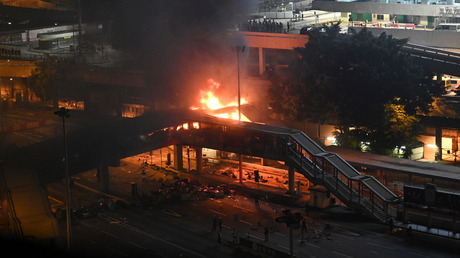 Authorities in Greece were on high alert Friday in case annual rallies commemorating the fatal police shooting of a teenage boy 11 years ago once again turn violent.

Thousands of police were being deployed in the capital ahead of at least two demonstrations to remember 15-year-old Alexandros Grigoropoulos who was killed by an officer on December 6, 2008.

Similar events have been held almost every year since and frequently result in violent clashes between security forces and protesters.

At the time, the shooting sparked days of rioting across Greece, with the anger at police compounded by the country's worsening economic situation and a raft of corruption scandals burdening the then conservative government.

"December 6 has become the symbol of the uprising against police violence in Greece," says Sotiris Chtouris, a sociology professor at the University of the Aegean.

The patrol officer who shot Grigoropoulos, Epaminondas Korkoneas, claimed he was acting in self-defence as he fired three shots in the bohemian Athens district of Exarchia, allegedly to keep back youngsters who were hurling objects at them.

Grigoropoulos was hit by a bullet in the chest and died before he could be taken to hospital.

For more than a month, hundreds of businesses were vandalised in Athens and other cities on the sidelines of protests by school pupils, university students, unions and left-wing parties.

"This was the last straw," one protester, 25-year-old sociologist Anastassia Kotzamani, told AFP at the time.

"We have completed our studies, there is no work and our only option is to leave the country," she said.

According to a poll at the time, 60 percent of respondents interpreted the youth riots -- which came around a year before the start of the Greek debt crisis -- as a spontaneous "social uprising".

A decade of austerity followed as Greece was revealed soon afterwards to have falsified its fiscal data. As its borrowing costs spiked, the country essentially went bankrupt, propped up by billions of euros in EU-IMF loans in return for steep spending cuts that wiped out a quarter of national output.

"Nothing has really changed since 2008," Chtouris told AFP.

"The relationship between the state and youths has not changed, and their situation has not really improved," he said, as figures continue to show a jobless rate of over 30 percent among those under the age of 24.

Future prime minister Alexis Tsipras, freshly installed as leader of the soon-to-be Syriza party, said the government had failed to understand the "major social indignation" of Greek youth and called for the police to be disarmed.

The interior minister at the time, Prokopis Pavlopoulos, urged police to adopt a "defensive" stance even when under attack to avert further loss of life.

His stance was welcomed by Tsipras who upon becoming prime minister in 2015 nominated Pavlopoulos as president of the Greek state.

In July this year, Grigoropoulos' killer Korkoneas was released from prison after his life sentence was reduced, having spent over a decade in jail.

The decision raised controversy and last month, the Supreme Court called for his early release to be re-evaluated.

The government is bracing for potential trouble on Friday. In past weeks, the new conservative government of Prime Minister Kyriakos Mitsotakis has sparked criticism by ordering police to clear a number of illegal squats in Athens.

The authorities said many were used as bases by anarchists who regularly launch assaults on police -- but several housed asylum-seeker families.

There is also tension over a recent amendment to facilitate police checks in universities, which has prompted several student protests.