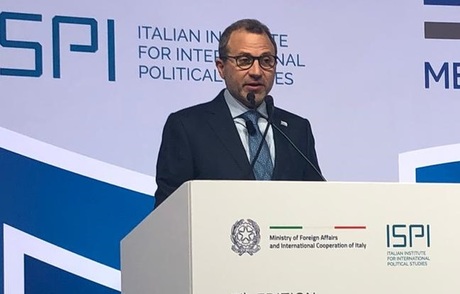 Caretaker Foreign Minister Jebran Bassil on Friday warned Europe that chaos in Lebanon would create repercussions similar to those of the Syrian crisis, such as extremism and a refugee influx towards Europe.

“Chaos in Lebanon – which some foreign forces are plotting – will have a similar outcome as that of the Syrian crisis: the country’s ruin, the destruction of its institutions, bloodshed among its sons, roving extremism and an influx of refugees towards you,” Bassil warned in a speech in Rome during the Mediterranean Dialogues conference.

“Seeking improvement or out of extremism, Lebanon’s guests (Syrian refugees) will seek to move towards you and Lebanon will not be able to stop them from carrying their problems to you,” Bassil cautioned, addressing the European countries.

“Chaos in Lebanon will create a flaw in internal balances, whereas Lebanon, the country of balances, cannot withstand further flaws,” the minister added.

Noting that the approach of “winners and losers” in Lebanon is “rejected and unsustainable,” Bassil emphasized that “there is no place in Lebanon for unilateralism.”

Speaking during a discussion session later in the day, Bassil said “the current uprising is the only way to implement the necessary reforms, after all other means to achieve them were blocked.”

Asked how the young generation is behaving in terms of the unprecedented protests that have rocked Lebanon since October 17, Bassil said the revolt is the result of the “failure of politicians and the political system.”

“People on the streets are rightful, because they took to the streets due to their pain… but some are trying to exploit the issue to achieve negative objectives and control the events but they have so far failed,” Bassil added.

Quel toupet !
He robbed and bankrupted the country causing it to collapse then he “warns” of chaos in Lebanon. Bashar did the same when the people wanted a regime change, he created Daesh. What will he create ? We already have a Shia Daesh aka Hizbala.

It is like the Mafia that assassinate a person and then walk in his funeral. Enough creating problems so you can use it as an excuse to steal more money and add more debts to current and future generations. Game is over!

Mr. Bassil the only thing I remember now when I see your ugly face is "Hela Hela, Hela Hela Ho".

Why was this criminal allowed to speak in the first place?

Because he’s the criminal in law.