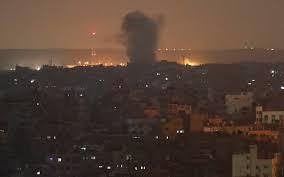 The strikes targeted two sites belonging to Al-Qassam Brigades, the Hamas military wing, in northern Gaza, with another series of sorties at a Qassam site west of Gaza City, Hamas officials said.

There were no immediate reports of injuries.

The Israeli army said "fighter jets and attack helicopters struck a number of Hamas terror targets" in Gaza, as well as "a military post belonging to the Hamas naval force in the northern Gaza Strip."

"The IDF (Israeli army) holds the Hamas terror organization responsible for events transpiring in the Gaza Strip and emanating from it," the army said in a statement.

"Hamas will bear the consequences for actions against Israeli civilians."

All three projectiles were intercepted by the Iron Dome defense system, the army said, amending an earlier statement according to which two of the three rockets were shot down over southern Israel.

There were no immediate reports of material damage.

On November 29, Israeli warplanes struck Hamas positions in Gaza in response to rocket fire at the Jewish state the previous day.

Hamas has controlled Gaza since 2007, and Israel holds the Islamist movement responsible for all rocket fire coming from the territory, although it has targeted other militant groups there.

Islamic Jihad fired around 450 rockets at Israel, many of which were intercepted by the Iron Dome defense system.

Israel has fought three wars with Hamas and allied armed groups in Gaza since 2008.