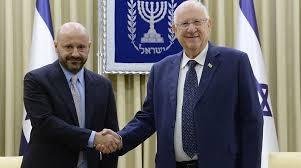 Israeli President Reuven Rivlin on Sunday hosted a Lebanese-born Swiss real estate mogul who purchased Nazi memorabilia at a German auction and is donating the items to Israel.

Chatila, a Lebanese Christian who has lived in Switzerland for decades, paid some 600,000 euros ($660,000) for the items at the Munich auction last month, intending to destroy them after reading of Jewish groups' objections to the sale. Shortly before the auction, however, he decided it would be better to donate them to a Jewish organization. Among the items he bought were Adolf Hitler's top hat, a silver-plated edition of Hitler's "Mein Kampf" and a typewriter used by the dictator's secretary.

The items are to be donated to Israel's Yad Vashem Holocaust Memorial.

Chatila said he initially bought the items for personal reasons.

"He is the personification of evil -- evil for everyone, not evil for the Jews, evil for the Christians, evil for humanity," he said. "And that's why it was important for me to buy those artifacts."

But Chatila decided that he "had no right to decide" what to do with these artifacts, so he reached out to Keren Hayesod-United Israel Appeal, a nonprofit fundraising body that assists Israeli and Jewish causes. It then decided to pass the items on to Yad Vashem because of its existing collection of Nazi artifacts.

"Usually Yad Vashem doesn't support trade. We do not believe in trade of artifacts that come from the Nazi party or other parts," said Avner Shalev, chairman of Yad Vashem. "We like that it should be in the hands of museums or public collectors and not in private hands."

At a press conference held at Rivlin's residence, Chatila said his donation has been criticized by some in his homeland. Israel and Lebanon have never signed a peace agreement, and relations remain hostile.

"I got a few messages saying that I was a traitor, saying that I helped the enemy. And also some messages of people warning me not to go back to Lebanon," he said. "It's easy for me as I don't go to Lebanon. I don't have a problem with it."

But Chatila said his parents still travel to Lebanon, making the backlash difficult for his family.

Rivlin thanked Chatila for his act and donation "of great importance at this time" when Holocaust denial and neo-Nazism are on the rise. He also noted that the artifacts would help preserve the Holocaust legacy for future generations who will not be able to meet or hear from the dwindling population of aging survivors.

"What you did was seemingly so simple, but this act of grace shows the whole world how to fight the glorification of hatred and incitement against other people. It was a truly human act," Rivlin said.

The items are still at the German auction house, and it was not immediately known when they would be transferred to Yad Vashem.

Chatila was born in Beirut into a family of Christian jewelers and moved to Switzerland at the age of two.

Now among Switzerland's richest 300 people, he supports charities and causes, including many relating to Lebanon and Syrian refugees.

He said it was a powerful statement against racism and xenophobia, especially coming from a non-Jew of Lebanese origin.

Why are you even reporting this?

Probably to show that Lebanese and Israelis can co-operate, if they wish.

You should listen to this.... it’s really sad because it takes away hope. Yet hope for a better life is the only thing Palestinians have. https://omny.fm/shows/haaretz-podcast/israel-s-goal-is-to-kill-palestine-not-palestinian