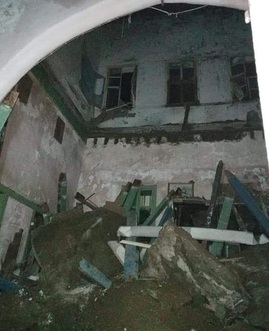 Angry protesters on Tuesday attacked the municipality of the northern city of Tripoli after two individuals died in a residential building collapse in al-Mina neighborhood.

Protesters fiercely threw stones at the windows of the municipality after the Lebanese army prevented them from forcing their way into the building.

A utility room belonging to the municipality and located outside the main building was set on fire. Civil Defense fireteams intervened immediately to distinguish the blaze.

Two people were killed at dawn Tuesday when the roof of a residential building collapsed in al-Mina in Tripoli, the National News Agency reported.

Rescue teams of the Civil Defense, Lebanese army and Internal Security Forces were at the scene immediately after the incident, said NNA.

In response, protesters angered with what they say “ignorance” of the authority blocked the main highway with burning tires and stormed the municipality building setting the trash bins on fire and smashing its outdoor.

I don’t understand why the municipality should be held for responsible. It’s a maintenance problem, it’s the owner who should do the repairs when He sees cracks... unless the construction was illegal then why would people live there then blame the municipality...
Unless nearby road construction happened and destabilized the building then it should be held accountable for sure.