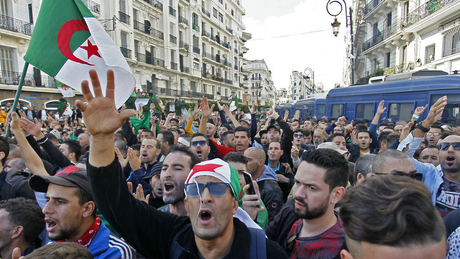 Key dates in the history of Algeria ahead of its contentious December 12 presidential election.

On July 5, 1962, Algeria proclaims its independence after 132 years as a French colony and a nearly eight-year independence war.

Its first president is Ahmed Ben Bella, secretary general of the National Liberation Front (FLN) which led the struggle against colonial rule and is the only legal political party.

In 1964, it adopts a constitution enshrining socialism.

The next year defence minister Houari Boumediene overthrows and jails Ben Bella, making himself head of the Revolutionary Council and the government.

Boumediene is elected president in 1976; but dies two years later and is succeeded by Chadli Bendjedid.

In 1988, protests rock the capital and spread to other cities. Authorities declare a state of emergency and the army cracks down. Nearly 170 are killed, according to an official toll, but the media report around 500 dead.

In 1989, a new constitution establishes multi-party rule in the secular state.

In 1990, the Islamic Salvation Front (FIS), which wants to establish an Islamic state, sweeps the country's first multi-party municipal elections.

A state of emergency is proclaimed in 1991 after clashes between the security forces and FIS protesters.

Months later the FIS comes close to an absolute majority in the first round of the first multi-party legislative polls.

In early 1992, the army cancels the elections, Bendjedid resigns, emergency rule is established and the FIS is dissolved.

That sparks a 10-year civil war that eventually claims 200,000 lives, with many civilians dying in attacks blamed on Islamist groups.

In 1999, FLN politician and former government minister Abdelaziz Bouteflika is elected president, with the backing of the army, and seeks to restore peace. Thousands of Islamists agree to benefit from two amnesty laws and lay down arms.

In 2001, the death of a high school student in a police station in the northern Kabylie region leads to "Black Spring" riots by the Berber minority. In a crack down ordered by Bouteflika, more than 120 are killed and hundreds injured.

In 2002, the Berber language, Tamazight, is recognised as the second official language alongside Arabic.

In April 2007, two suicide car bombings rock Algiers, killing more than 30 people. They are claimed by Al-Qaeda in the Islamic Maghreb (AQIM), an Islamist militant group which had just months before pledged allegiance to the Al-Qaeda network.

In September, Bouteflika's convoy is targeted by a suicide attack and in December the Constitutional Council and UN offices are targeted, also by AQIM.

In January 2013, an AQIM affiliate takes hundreds hostage at a gas plant at In Amenas, in the remote southeastern desert. Forty hostages die, including foreign nationals, and 29 Islamist assailants are killed.

In January 2011, food riots erupt amid the regional upheaval of the Arab Spring revolt. Five people are killed and more than 800 injured, but the regime uses its oil wealth to boost salaries and subsidies, buying calm.

Eight years later in February 2019, massive protests erupt against the now-ailing Bouteflika's bid for a fifth term in April elections.

On April 2, after losing support from key loyalists and the army, Bouteflika submits his resignation after two decades in power.

But protesters continue to hold mass rallies, demanding an overhaul of the entire military-dominated political establishment and rejecting the December 12 presidential election.