HRW Warns of Impact of Financial Crisis on Lebanon Hospitals 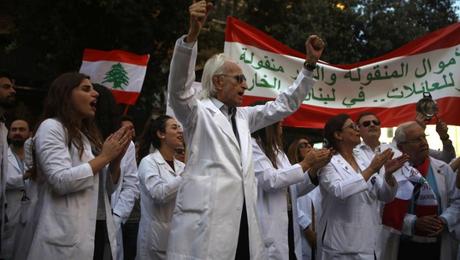 Many Lebanese hospitals may soon be unable to provide patients with life-saving surgery and urgent medical care amid the worsening financial crisis, an international rights group warned on Tuesday.

For years, the Lebanese state has failed to pay its debts to public and private hospitals, making it more difficult for them to buy medical supplies and pay salaries.

"While politicians horse-trade over a new Cabinet, the government is not responding to the desperate economic situation in the country and the clock is ticking on the ability of many doctors and hospitals to treat patients," he warned.

The economic crisis has led to unprecedented capital controls by lenders. It has also affected imports amid a shortage of U.S. dollars that the Lebanese banking system heavily relies on. Lebanon imports most of its basic needs such as medicine, fuel, wheat and medical products.

Suleiman Haroun, the president of the Syndicate of Private Hospitals, told The Associated Press that the health sector is passing through "a very serious crisis" because doctors are facing a shortage of foreign medication and equipment.

Haroun said that importers of medical products have been saying since September that they have not been able to buy new stocks. This is causing shortages in urgently needed material, including stents for hearts, filters for kidney and blood bags, he added.

Today it’s amnesty international day...l remember to light up a candle at night and out it near your window... in solidarity with prisoners of opinion.