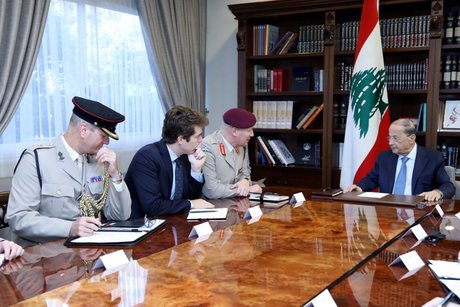 A British envoy who arrived in Beirut late on Tuesday will meet senior Lebanese officials to “discuss the situation in Lebanon at various levels”, al-Joumhouria daily reported on Wednesday.

Lorimer affirmed to the President that Britain “will continue to support the Lebnese army with equipment and training,” the National News Agency quoted him as saying.

Lorimer is scheduled to later meet Speaker Nabih Berri and caretaker Prime Minister Saad Hariri and a group of officials, said the daily.

Well-informed sources told the daily that “Lorimer's visit is not different from the mission of the British and French envoys, who had visited Beirut in recent weeks in preparation for forming a comprehensive European position on what is happening in Lebanon at various levels.”

Yes please support our Army so that its even more capable of supporting the government and suppressing the people! Also insure that some new technology is given the Army to be able to allow Kizb to attain it for free!