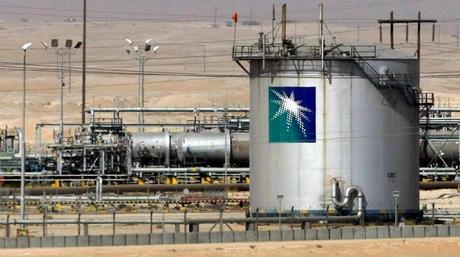 Saudi Aramco shares soared 10 percent to the daily limit on their trading debut on the Saudi stock exchange Wednesday, boosting the energy giant's valuation to a massive $1.88 trillion.

The listing of Aramco, with its huge capital value, boosts the Saudi bourse -- known as Tadawul -- to the ranks of the world's top ten. In the first few seconds of trade, orders for 16 million shares were placed.

The market debut comes after Aramco completed the world's biggest initial public offering (IPO) in which it sold 1.725 percent of its shares for a record-breaking $29.44 billion.

If only 1.75% are publicly owned, how can there be a valuation: how is the rest valued? Doesn't "publicly owned" equal "traded"?
Wikipedia:
On November 9, 2019...600-page prospectus... up to 0.5 per cent of the shares were locked for individual retail investors.
On 4 December 2019, Saudi Aramco priced its offering at 32 Saudi riyal (approximately $8.53) per share. The company generated subscriptions of ... $119 billion representing 456% of total offer shares. It raised $25.6 billion in its IPO, making it the world's largest IPO to date, ....[63] The company commenced trading on Tadawul on 11 December 2019, with shares rising 10% to 35.2 riyals, giving the company a market capitalisation of about $1.88 trillion, and making Saudi Aramco the world's largest listed company. (end)
That means the company is shadow-valued by the IPO fraction. Equally, profitability depends on expense of oil: how do you value material cost of oil extraction? House of cards all around.