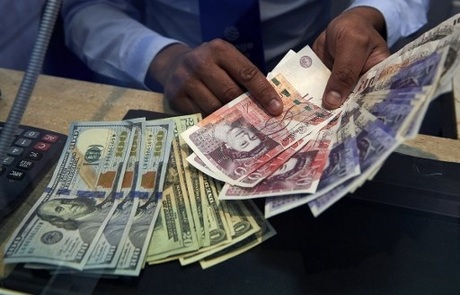 The British pound bounced back Wednesday ahead of a UK general election, even as a fresh poll predicted Prime Minister Boris Johnson's ruling Conservatives would win a much smaller majority than previously forecast.

Sterling initially fell sharply before recouping losses to show a gain of 0.2 percent against the dollar in afternoon exchanges.

Pre-election jitters continued to weigh, however, on the British capital's FTSE 100 index of blue-chip companies, which was down 0.2 percent as caution prevailed.

"The highly-regarded poll shows that the Conservative advantage has slipped. This is the poll that correctly predicted a hung parliament in 2017 -- and indicates that the scenario could repeat itself," said analyst Fiona Cincotta at trading firm City Index.

The YouGov opinion poll said the Tories would win Thursday's vote, with a majority of 28 seats, sharply down from the 68 forecast in a similar study at the end of November.

Sterling has surged in recent weeks -- sitting at an eight-month high against the greenback and a two-and-a-half-year peak against the euro -- on expectations Johnson would win a big enough majority to push through his Brexit deal.

However, the narrowing polls point to the possibility of another hung parliament -- which would lead to more uncertainty in Westminster and drag out the Britain-EU saga even longer.

"There's a bit of a waiting mode at the moment," Oanda analyst Craig Erlam told AFP.

"There's probably too much optimism in the market right now, a bit of complacency even."

As trading got underway in New York, the Dow Jones index showed a loss of 0.1 percent.

Elsewhere, Asian markets mostly rose Wednesday but investors are growing nervous at the lack of news on China-US trade talks, with Washington yet to cancel tariffs on a swathe of Chinese goods planned for the weekend.

Negotiators are still trying to hammer out a mini agreement and the mood on trading floors remains upbeat, while most observers are confident the two sides will reach a deal, which has fed a global equities rally for weeks.

However, a fresh round of levies on $160 billion of Chinese exports to the U.S. is due to be imposed on December 15, and there has been no word from the White House on a possible delay to that date.

The removal of tariffs is a key demand of Beijing in the talks.

And on Tuesday Donald Trump's top economics adviser Larry Kudlow warned that the measures remained in play for now.

The Federal Reserve's policy decision later Wednesday is in focus too, with the central bank's plans for monetary policy next year being watched closely.

Analysts nonetheless widely expect the central bank to hold off making any moves on interest rates as it assesses the state of the U.S. economy.

In company news, shares in Saudi Aramco soared 10 percent on their trading debut on the Saudi stock exchange, boosting the energy titan's valuation to $1.88 trillion.