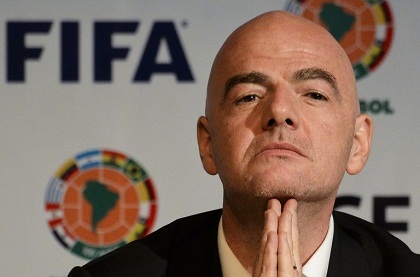 FIFA has not given its backing to reported plans for a closed European super league, its president Gianni Infantino said Wednesday.

"FIFA is not backing any project," Infantino said during a visit to Brussels, refusing to deny however that any talks had taken place on the subject by saying that football's global governing body "discusses everything, with everybody".

Infantino was questioned by reporters after the New York Times reported that Real Madrid president Florentino Perez had spoken to him about creating a breakaway elite international league.

The report said the league could feature two divisions of 20 teams drawn from current national leagues, with the hope of winning a lucrative continental audience.

It would chiefly feature clubs from the leading five European leagues -- England, Spain, Italy, Germany and France -- but the Association of European Leagues has denounced the plan.

European football governing body UEFA has also criticized any plan that would undermine its Champions League.