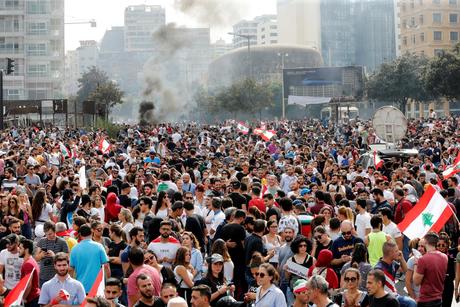 Hundreds of private owned businesses announced a collective tax strike that they said would “lend their value to workers instead to maintain their livelihood,” as Lebanon passes through an unprecedented economic crisis that saw hundreds of employees laid off.

Lebanese business owners gathered Wednesday in central Beirut to protest the delay in forming a new government and threatening a collective tax strike. Organizers said most private businesses have already been unable to pay taxes and are still getting slapped with penalties.

Billions of dollars are paid annually by the private sector, companies and individuals, as taxes and fees, “but it turns out that a large part of it goes into the pockets of some beneficiaries to finance an inflating public sector, money squandering and corruption,” organizers said.

In recent weeks, hundreds of people have been laid off or are receiving reduced salaries, while many businesses had to shut down.

“Workers deserve this money better,” the organizers said. “They bear the consequences of the state’s waste and corruption that caused their companies to close down after the public deficit drained the banks ’money and left the companies in disguised capital control.”