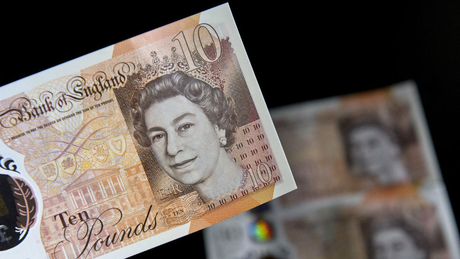 The British pound dipped Thursday as Britons voted in a vital general election that seeks to determine the future of Brexit.

In late morning deals, the pound declined somewhat, having spiked overnight to a ten-month peak at $1.3229 on expectations of an election win for Prime Minister Boris Johnson's Conservative Party.

Johnson has called Thursday's snap vote in a bid to gain a decisive mandate to leave the European Union on January 31, more than three and a half years after Britain narrowly voted in a referendum to leave.

However investors were sitting tight awaiting the vote outcome as polls have tightened in recent days, suggesting that a hung parliament, or no-overall majority for either the Tories or main opposition Labour party, could still occur.

New president Christine Lagarde makes her first monetary policy announcements, with observers watching for clues about the bank's future direction and her plans for a major reassessment of its tools and goals.

A statement is expected to unveil no change to predecessor Mario Draghi's ultra-loose monetary policy following Lagarde's maiden meeting of the ECB's governing council in Frankfurt.

Earlier Thursday in Asia, equity markets mostly closed higher after the Federal Reserve indicated it was unlikely to change US interest rates throughout next year.

Investors are tracking developments also in the China-US trade talks, with nervousness setting in as a deadline for fresh US tariffs on Chinese goods approaches and no sign yet that they will be delayed.

While negotiations between the economic superpowers are the main focus on trading floors, the Fed's latest policy announcement stole the show Wednesday.

The central bank, which has cut borrowing costs three times this year, said after a two-day meeting it would hold them for now and set its sights on low inflation and the global economy.