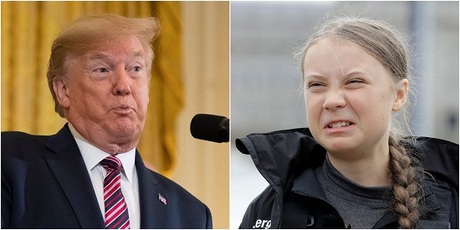 U.S. President Donald Trump on Thursday slammed Time magazine's naming of Greta Thunberg as 2019 Person of the Year, saying the climate activist should "chill" and go see a movie.

"So ridiculous. Greta must work on her Anger Management problem, then go to a good old fashioned movie with a friend! Chill Greta, Chill!" he tweeted.

The diss came after the magazine on Wednesday honored 16-year-old Thunberg, who last year launched a solo "School Strike for the Climate," or "Fridays For Future," protest against global warming that has since grown into a worldwide movement and seen her tipped as a potential Nobel laureate.

Thunberg has become known for her fiery speeches to world leaders, and was on Wednesday in Madrid, where she accused rich countries of "misleading" people into thinking they are taking meaningful action against climate change.

In perhaps her most iconic appearance, she laid in to world leaders at another UN climate summit in September, thundering "How dare you?" for failing to take action to stop runaway global warming.

Her rhetoric, youth and diagnosis of Asperger's syndrome, a mild form of autism, have made her a frequent target of critics.

Brazilian President Jair Bolsonaro dismissed her as a "brat," and following her September speech in New York, Trump quipped that she is a "very happy young girl looking forward to a bright and wonderful future."

I don't know about anything else, but as a 16 year old, she should simply go back to school.