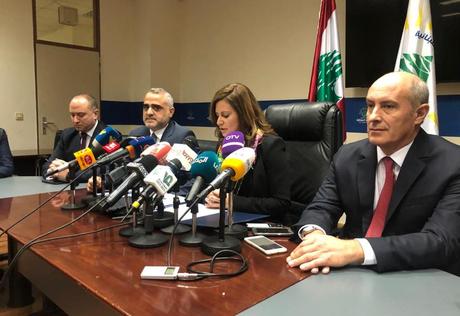 Caretaker Energy Minister Nada Bustani on Friday handed the license to drill Lebanon’s first oil exploration well in its territorial waters to the director of Total.

Bustani handed over the permit to drill in Bloc 4 to a consortium comprising energy giants Total (France), ENI (Italy) and Novatek (Russia).

Last year, Lebanon signed its first contract to drill for oil and gas in its waters.

Total, ENI and Novatek took the first two of its 10 blocks, including in Bloc 9, disputed by neighboring Israel with which Lebanon has fought several wars.

Total said it was aware of the border dispute in less than eight percent of block 9 and said it would drill away from that area.

Roughly, we are getting 30 to 40% of the crude material. it is a calculation based on the amount of findings..

Lets hope the contract was done without ensuring the ministers get the cuts before the treasury. I am sure this was not done on the up and up.

They seem like they are so happy about it---they don't tell the pubic that it will take a few years to begin to see its benefits. Basil made some committee and starting paying them a few years ago--representatives of 6 sects and they were getting something like $150,000 per year while doing nothing.

Total gave Bassil and Ned Hariri substantial kickbacks to get the contract, this also applies to the Italian and Russian companies involved. The technocratic gov should look into this and cancel the deals for corruption.

It is highly undoubtedly that a deal like this can be done without commissions. There would be commissions even in a civilized country... so imagine how much Bassil probably filled
his pockets... I hope someday day someone can find out about this...

We won’t know the figures because the DGSE is involved...