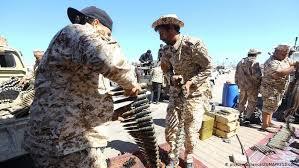 The leaders of France, Germany and Italy urged all sides in the Libyan conflict to cease fighting Friday, after strongman Khalifa Haftar threatened to assault Tripoli.

After an EU summit in Brussels, Emmanuel Macron, Angela Merkel and Giuseppe Conte said stability in Libya "can only be achieved through a political solution."

The trio did not mention Haftar by name, but their statement was issued after he announced a "decisive battle and the advance on the heart of Tripoli."

The capital is held by Libya's U.N.-recognized Government of National Accord (GNA), but Haftar, supported by the United Arab Emirates, says it backs "terrorists."

European powers are worried further violence could disrupt fragile efforts to negotiate peace, including an upcoming international conference in Berlin.

The three urged "all Libyan and international parties to cease military action, make a sincere commitment to a comprehensive and lasting cessation of hostilities and resume a credible U.N.-led negotiation process.

"They reaffirmed their full support for the United Nations and the work of the Special Representative of the Secretary General, Ghassan Salame, as lasting peace and stability in Libya can only be achieved through a political solution," the statement said.

At least 200 civilians and more than 2,000 fighters have been killed since April, the start of Haftar's push on Tripoli, according to the United Nations. The fighting has also displaced some 146,000 people.