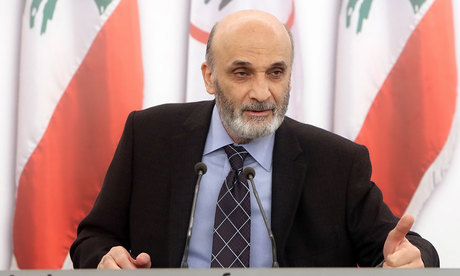 Lebanese Forces chief Samir Geagea said on Saturday that his party will not participate in the new government but will take part in the consultations with President Michel Aoun to name a new PM in Baabda on Monday.

“The Lebanese Forces will not take part in the new government but we will participate in the binding parliamentary consultations to name a new premier,” Geagea told reporters after a meeting with Ghattas Khoury, adviser to caretaker PM Saad Hariri.

On the form of the new government he said: “We support a government of independent specialists because replicating the same government formulas (a national unity government) have proven useless.”

For his part, Khoury told reporters: “Parties are seeking a government inclusive of partisans and citizens from the protest movement,” assuring that Hariri is seeking all means to reach a solution.

“We are seeking a new stage in which political parties and citizens who took to the streets have a role in the government,” he added.

The meeting between the two men came after Free Patriotic Movement chief Jebran Bassil on Thursday announced that the FPM will not take part in any techno-political government, calling for a government led by a technocrat and comprising technocrat ministers.

Aoun is expected on Monday to begin the binding parliamentary consultations to name who will lead the new government after the resignation of Hariri on October 29, two weeks into the revolt.

Lebanon was swept by nationwide protests on October 17 against corruption and mismanagement demanding an overhaul of the political class.

So what is the bad news?

What about you and your shia terrorists who massacred thousands of women and children in Syria, Iraq and Yemen under your imaginary Mahdi's name?

The truth hurt sometimes, but again you do not know what truth is because your boss made you blind.

Think of Geagea as your imam Mousa Sadr. If the Syrian were able to kill him they would not have wasted a single minute. Your boss house is in glass so spare us from speaking by simply remembering if you have brain cells your latest 2006 war that killed 2000 innocent people because of his idiotic mindset, plus you destroyed an entire country infrastructure to make Iran happy, yet Iran did not build a single bridge or power plant but rather continue to arm a single entity of the Lebanese people to divide and conquer.

Had hezbollah not fought in 2006, then all of Lebanon would've been dust until today.

You think Jews care about you? Think again. Jews cares only about themselves.

Killing the people of Yemen and Syria? That is your Saudi masters that funded the turmoil and Syria, before this war Syria was find.

and Yemen, how many children did your beloved Arab coalition bomb to dust?
How many yemeni babies starve because of the Saudi/American blockade?

Syria was fine and blossomed, until the Saudi/Arab spring plague happend.

The war in Yemen was over, and then the Saudis had to interfeer to destroy Yemen further, because they did not want it to be in the hands of the Ansarullah.