Israel Says Hizbullah, Lebanon ‘Will Pay Dearly’ for Any Attack 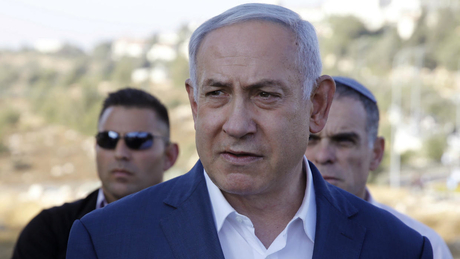 Israeli Prime Minister Benjamin Netanyahu issued a warning that Hizbullah and the State of Lebanon will pay dearly for any assault against Israel, Israeli media reports said on Monday.

At his weekly cabinet meeting, Netanyahu said that “Iran had launched new threats of destroying Tel Aviv from inside Lebanon, which means Hizbullah is the proxy wing of Iran.”

He added saying that both “Lebanon and Hizbullah will pay dearly if the party launches attack on Israel, because Lebanon allows attacks from its territory against Israel.”

You ARE a Zionest project Mystic Yes like ISIS

Nataniahu and Hizbollah are two sides of the same coin. They use each other to scare their population so they can nurture a war mentality, a war economy, easy indoctrination and diverting people attention from freedom and democracy. They are each other best asset! Hizbollah nightmare is if Lebanon sign a peace treaty with Israel in exchange of money reparation targeted primarily to the South as this would open Lebanon for joint venture and make the South land most valuable in the Middle East. Hizbollah greater nightmare is the prosperity of the Shiaa as they remember the Iranian Green Revolution was spearheaded by educated and productive Iranians, Hizb can only survive by keeping Shia poor indoctrinated in a mentality of war.

Typical secterian comment. Show me the statistics that shia are uneducated and poor unlike the so called rich educated maronites or other non-shias?

Since y'all are so educated and rich, why the need to protest for a better economy? Shouldn't your political parties (since they are unlike hezb) have made you rich going by your dumb logic? Hezballah has no power in maronite areas nor in tripoli or druze areas etc, explain the poverty there?

Ahbal. A cheap ahbal willing to sell the victims of israel for a filthy price like a real judas.

A third of Iran’s people demonstrated against the regime during the Green Revolution in 2010. They represented the most educated and productive part of the Iranian society. They were brutally suppressed and many were killed or imprisoned by the Basij, representing the least educated and most indoctrinated section of the Iranian society bought by degrading meager subsidies and early marriage because college education. Basij were conditioned to follow blindly the supreme leader that 90% of Iranian living outside Iran refer to as the Grand inquisitor or Grand Satan. If Imam Moussa Sadr was living today, he would be the prime supporter of the Green Revolution and Lebanon Cedar Revolution.

South Lebanon can become the Silicon Valley and most prosperous region of the Middle East after peace with Israel due to our human resources, education system and entrepreneurial spirit. Soon Israeli Arabs will enter the government and we are still fighting fictitious wars so Iran can use Lebanon as its attack dog. We were once the headquarter for all multinationals doing business in the Middle East until Hizbollh scared them away. Hizbollah day of reckoning will come from Shia first once they realize the harm it caused them. Its claimed popular support is a mile wide but an inch deep, Just like Saddam and Kaddafi 99% support before they fell!

gebran_sons what you are writing means treason, watch what you write.
An Nahar newspaper cannot bail you out of jail when you have treason charges, security forces can arrest on sight.

Mystic go have a life! Hizbollah is created, funded and indoctrinated by Iranian radicals to pursue their radical objectives at the expense of Lebanon. Hizbollah is by definition a foreign agent and any supporter of this criminal organization responsible for killing Lebanon's brightest including Gebran Tueni and pushing Lebanon towards bankruptcy should be put in prison. Hizbollah is a paper tiger that will soon be brought to justice once Lebanon regain its freedom and independence. Mark my words!

Wouldn't it be nice to put Netanyahu and Nasrallah in a cage for a fight to the death?