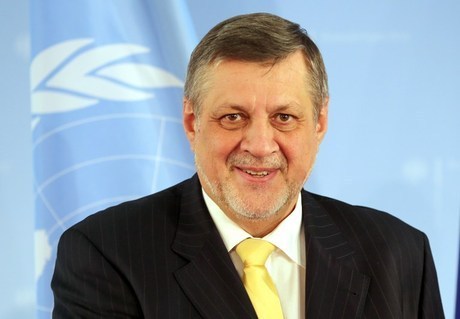 UN Special Coordinator for Lebanon Jan Kubis regretted the postponement of Lebanon's talks to pick a new prime minister in light of an aggravating political and economic crisis.

On Twitter, Kubis said: “Yet another postponement of the parliamentary consultations. Either a sign that following the events and statements of the last days politicians start to understand that they cannot neglect the voice of the people, or another attempt to buy time for business as usual.”

It is not the first time the talks have been delayed. Parliamentary consultations had been scheduled for December 9 before being pushed back a week.

Noting the consequences it has on a frail economy, Kubis added on the postponment: “But with the collapsing economy it is a risky hazard both for the politicians but even more so for Lebanon and its people.”

Kubis emphasized that “the violence and clashes over the weekend once again showed that postponements of a political solution of the current crisis create a fertile ground for provocations and political manipulation.

“Identification of instigators of violence investigation of the incidents as well as of use of excessive force by the security forces is necessary, also to prevent sliding down towards more aggressive and confrontational behavior of all,” he concluded.

He's concerned that people might start talking about Article 24 of the Lebanese Constitution which reserves half of Parliament for Christians. They might even talk about getting rid of it. They might even say it is the reason Lebanon has all these troubles. It prevents the government from reflecting the will of the people. It prevents the government from governing. Lebanon doesn't have a government, then. Proof: no prime minister, and nothing changes. I find Kubis's phrase, "neglect the voice of the people", racist. He apparently thinks Lebanese are stupid, incapable of self-government, so a few thugs speak for them as long as these are the right thugs.