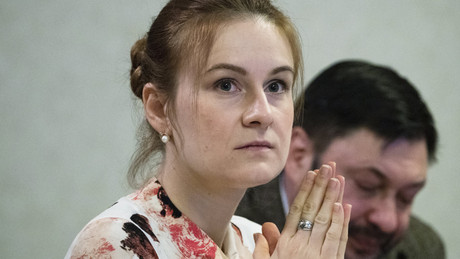 Maria Butina, who was expelled from the United States in October for acting as an unregistered foreign agent, is to get her own television show on pro-Kremlin channel RT.

The channel, formerly known as Russia Today, announced on its website that she would be a presenter with them on a Wednesday evening show.

The video promoting her appointment shows a smiling Butina sporting a black T-shirt with the words "Foreign Agent" printed on it in English.

Butina was deported from the United States after nine months in detention, having agreed a plea deal.

She admitted having acted as an unregistered foreign agent and was sentenced to 18 months in prison, half of which was credited as time served.

On her new show, Butina will offer commentary on Russian current affairs on the channel, which is partly state funded.

She has already made at least one appearance on the channel, when earlier this month she offered commentary on the opposition demonstrations in Russia last summer.

Butina was the only Russian arrested and convicted in a three-year investigation of Moscow's interference in US politics.

Introducing herself as an advocate of gun rights in Russia, she built contacts with the powerful US lobby group the National Rifle Association (NRA).

That brought her into contact with President Donald Trump before his 2016 election, and with one of his sons, Donald Trump Jr, whom she reportedly met at a dinner during the 2016 NRA annual convention.

But the US sentencing memorandum did not say she was a Russian intelligence operative.

Anna Chapman, another Russian expelled from Russia for spying -- in 2010 -- also had a show on the same channel before going into business.