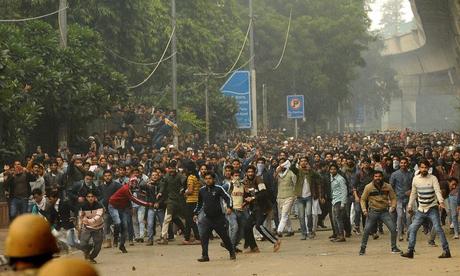 Police banned protests in New Delhi and several state capitals Thursday in an effort to contain growing dissatisfaction over a new citizenship law that opponents say threatens the secular nature of Indian democracy.

Protesters said they will go ahead with a demonstration at New Delhi's iconic Red Fort and surrounding historic district.

Dozens of demonstrations were planned around country as opposition to a new law that provides a path to citizenship for non-Muslim migrants grows across India.

The new law applies to Hindus, Christians and other religious minorities who are in India illegally but can demonstrate religious persecution in Muslim-majority Bangladesh, Pakistan and Afghanistan. It does not apply to Muslims. People fear it will be applied countrywide and target the country's Muslim population.

The law's passage last week by Parliament follows a contentious process in northeastern Assam state intended to weed out people who entered illegally. Nearly 2 million people in Assam were excluded from the list, about half Hindu and half Muslim, and have been asked to prove their citizenship or else be considered foreign.

India is also building a detention center for some of the tens of thousands of people the courts are expected to ultimately determine have entered illegally. Prime Minister Narendra Modi's interior minister, Amit Shah, has pledged to roll out the exercise nationwide.

Some Indian Muslims fear it's a means by which Hindu nationalists can put them in detention or deport them from the country.

Critics say it's the latest effort by Modi's Hindu nationalist-led government to marginalize India's 200 million Muslims, and a violation of the country's secular constitution.

Modi has defended it as a humanitarian gesture, but on Wednesday, authorities tightened restrictions on protesters, expanding the blockade of the internet and a curfew in Assam.