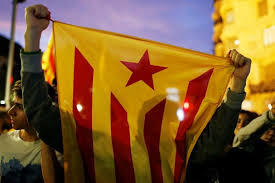 A court in Spain ruled Thursday that Catalonia's president Quim Torra was unfit to hold public office for 18 months because he failed to remove separatist symbols from public buildings during an election campaign.

The ruling will only come into effect if it is confirmed by Spain's Supreme Court, which could take months, and it could trigger an early election in the wealthy northeastern region.

Torra will make an address at 1:30 pm (1230 GMT) in response to the ruling, his office said in a statement.

They objected in particular to a banner outside the Catalonian regional government headquarters that read "Freedom for political prisoners and exiles" next to a yellow ribbon indicating support for nine detained Catalan separatist leaders who were sentenced in October to lengthy jail terms over an abortive 2017 independence bid.

That court ruling set off a wave of angry protests in Barcelona and other Catalan cities that repeatedly descended into violence.

The Catalan government ignored two deadlines to take the banner down before finally ceding just before a planned police intervention.

Catalonia's High Court of Justice ruled that Torra had displayed a "forceful, repeated and stubborn resistance" to follow the orders of the electoral board which "had been dictated in accordance with the law".

During his one-day trial last month Torra told the Barcelona court he did not believe the electoral board had the right to order him to remove the symbols because they are "not higher on the hierarchy than the president" of Catalonia.

He also refused to answer prosecutors’ questions and only replied to those from his defence lawyers.

"I did not respect (the order from the electoral authorities) or put another way, I disobeyed," Torra told the court, speaking in Catalan.

Many pro-independence supporters, including Torra, have adopted a yellow ribbon to protest the arrest and jailing of the Catalan separatist leaders over the 2017 independence bid.

The yellow ribbon "is not propaganda" but instead expresses a "desire for justice", Torra told the court.

Referring to the jailed Catalan separatist leaders as "political prisoners" was a question of "freedom of expression", he added.

Catalonia's parliament and its regional government are dominated by separatist parties, but the region itself remains deeply divided and the recent crisis has exacerbated the split.