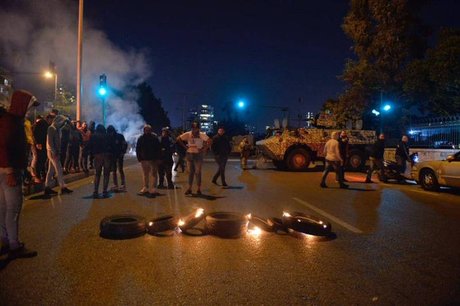 Protesters rejecting the appointment of the academic and ex-minister Hassan Diab as PM-designate on Thursday took to the streets in several regions to denounce the designation.

A number of angry young men who said they came from Tariq al-Jedideh rallied outside Diab’s residence in Beirut’s Tallet al-Khayat area.

Some of them shouted insults against Diab as others chanted slogans supportive of caretaker PM Saad Hariri.

The protesters added that Diab does not enjoy the support of the Sunni community.

Other protesters meanwhile blocked the Beirut-South highway in Naameh and Khalde and several key roads in the Bekaa and the North as well as the Qasqas, Sports City and Verdun roads in Beirut.

Anti-government protesters were meanwhile gathering in downtown Beirut and the northern city of Tripoli, voicing rejection of Diab’s appointment.

Protesters in Bekaa's al-Marj area said that they reject the designation of a former minister who belongs to the reviled political class as premier.

Diab's efforts to form a government will almost certainly hit snags in a deeply divided country facing the worst economic and financial crisis since the 1975-90 civil war.

President Michel Aoun named Diab as prime minister after a day of consultations with lawmakers in which he gained a simple majority of the 128-member parliament.

In his first public address, Diab said he would work quickly to form a government that represents a wide array of people following consultations with political parties as well as representatives of the protest movement. He said he is committed to a reform plan and described the current situation as "critical and sensitive" and requiring exceptional efforts and collaboration.

Diab, 60, faces the daunting task of forming a government to tackle the crippling financial crisis in one of the most indebted countries of the world. While gaining the majority of the votes, he failed to get the support of the country's major Sunni leaders, including caretaker PM Hariri, which will make it difficult for him to form a new government.

Support from Hizbullah guarantees a thorny path for any candidate, potentially inviting a push back from Western and Gulf nations that had supported the outgoing Hariri.

People on the streets have been protesting for over two months, calling for a government made up of specialists. The leaderless protest movement has differing views on the criteria for the next prime minister. The protests have recently taken a violent turn, with frequent clashes between security forces and protesters.

Supporters of Hizbullah and the AMAL Movement have also attacked the protest camp site in Beirut on several occasions.

Diab, who served as education minister in 2011, gained attention after caretaker prime minister Hariri withdrew his name from consideration following weeks of haggling and deep divisions between the various factions over naming him again. Hariri resigned Oct. 29 in response to unprecedented mass protests against the entire political class while an already dire economic crisis was quickly deteriorating.

Since then, efforts to agree on a new prime minister and the shape of government have kept hitting a dead end. Hariri, who is aligned with the West and Gulf countries, has insisted he would head a Cabinet made up of specialists to deal with the economic and financial crisis -- a key demand of the protest movement -- while the Iran-backed Hizbullah, which initially backed him, has demanded a government that includes all major political factions.

On Thursday, Hizbullah said it backed Diab for prime minister. Mohammed Raad, the head of the group's parliamentary bloc, said he hoped Diab receives enough votes and for him to "succeed in his national duties," and vowed to cooperate in tackling the current crisis.

"The protesters added that Diab does not enjoy the support of the Sunni community." wasn't the thawra against sectarianism?

"Support from Hizbullah guarantees a thorny path for any candidate" but they say they can get the support of china and russia so we are saved :)

"Supporters of Hizbullah and the AMAL Movement have also attacked the protest camp" yes, that is because they are against chaos and violence

How about not burning tires? They complain of pollution and cancer rates and then ignite this crap releasing hundreds of toxic pollutants and carcinogens. Stupid.