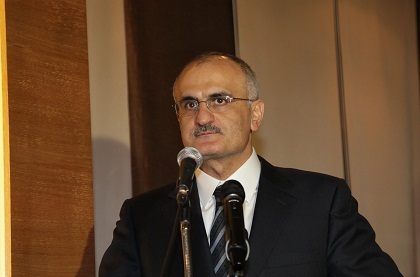 Lebanon's caretaker finance minister accused has the country's banks of "trapping" civil servants' salaries with withdrawal limits that have fueled public anger in the crisis-stricken country.

"What is happening in some Lebanese banks is unacceptable," Ali Hassan Khalil wrote on Twitter.

"They are trapping the salaries of (state) employees that are transferred by the finance ministry every month."

Rocked by two months of anti-government protests and a political deadlock, Lebanon is also facing its worst economic crisis since the 1975-1990 civil war.

A liquidity crunch has pushed Lebanese banks to impose capital controls on dollar accounts, capping withdrawals at around $1,000 a month. Some have imposed even tighter restrictions.

Some have also capped weekly withdrawals of the Lebanese pound at one million -- the equivalent of $660 at official rates -- even as the currency has plunged by nearly a third against the dollar on the black market in recent weeks.

The tightening controls have prompted public uproar, with many accusing banks of robbing them of their savings.

On Tuesday, Khalil said it was a "sacred right" of civil servants to be paid in full and on time.

"It is not permissible for this right to be violated," he said, vowing legal action to ensure public servants can access their salaries in full.

At banks in the northern city of Tripoli, tensions soared Tuesday as clients struggled to withdraw their salaries, said an AFP correspondent there.

A fight broke out in a branch near the city's main protest camp after the bank refused to let a customer withdraw dollars.

An anti-government street movement has rocked the small Mediterranean country since October 17.

Since then, a potential default on Lebanon's huge public debt has heightened the economic and political crisis.

The faltering economy has pushed many companies into bankruptcy, while others have laid off staff and slashed salaries.

A recession of more than 0.2 percent is expected for this year, the World Bank says.

In its first step towards forming an urgently-needed government, President Michel Aoun last week designated engineering professor Hassan Diab as the country's next prime minister, replacing Saad Hariri who quit in late October in the face of mass protests.

Diab, a self-styled technocrat, has vowed to form a cabinet of independent experts within six weeks.