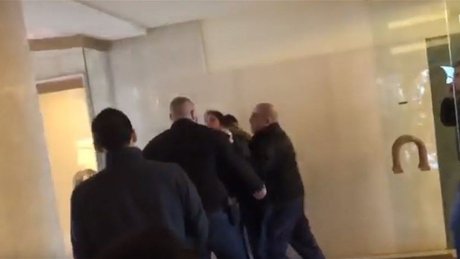 Anti-corruption protesters on Sunday scuffled with the guards of the house of caretaker Telecom Minister Mohammed Choucair in Beirut’s Hamra area.

Protesters said the guards beat up a number of young men who tried to enter the building.

Videos circulated online showed the presence of anti-riot police at the site.

Protesters meanwhile shouted slogans through megaphones outside the building.

According to the National News Agency, the protesters rallied to reject the extension of the contracts of Lebanon’s mobile telecom operators – touch and Alfa.

“No Extension No Renewal”, they shouted.

A decision by Choucair to impose a tax on calls via internet apps such as WhatsApp was the spark that on October 17 ignited unprecedented street protests in Lebanon against the entire political class.

The protests are still ongoing despite the swift reversal of the decision and the eventual resignation of Saad Hariri’s government.

I am still surprised how Hariri keeps covering Chucair ?