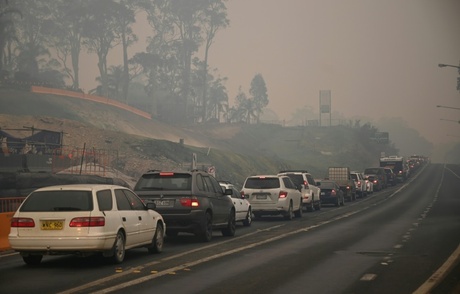 Australia's military launched the seaborne evacuation of hundreds of people trapped in a southeastern town Friday, as the country braced for yet more catastrophic bushfire conditions.

A navy landing craft from HMAS Choules docked in the town of Mallacoota, where residents who had been stuck on the foreshore since New Year's Eve clambered aboard with family, pets and a few belongings.

"Around 1,000 people should have been evacuated out of that area by this afternoon," Prime Minister Scott Morrison said.

At least 20 people have died, dozens are missing, more than 1,300 homes have been damaged in an unprecedented months-long bushfire crisis that has torched an area roughly double the size of Belgium or Hawaii.

And with temperatures expected to rise well above 40 degrees Celsius (104 Fahrenheit) again on Saturday, a state of emergency has been declared across much of Australia's heavily populated southeast.

Tens of thousands of people have been told to leave their homes across three states.

"There is still a window for people to leave," said New South Wales premier Gladys Berejiklian. "If you don't need to be in the area, you need to leave... that window will close."

Thousands of residents and tourists have been heeding that warning, fleeing a popular 300-kilometre (190-mile) length of coastline, with queues of cars stretching toward Sydney and Canberra.

On the road north of Nowra, families sat amid the haze in cars loaded with dogs, surfboards and bicycles, with traffic at a virtual standstill.

Eloise Givney, 26, escaped from the blazes with police escort after she and a large group of family members had spent four days isolated without power, phones or internet.

"The fire came within about 50 metres of us and we drove through fire, because there's only one road in and one road out," she told AFP, adding the flames soared 15 metres high on either side of the road.

"We've been stuck without power for four days now. We haven’t been able to feed the kids -- we've got five kids with us -- and we ran out of food about a day ago."

New South Wales Transport Minister Andrew Constance called it the "largest evacuation of people out of the region ever".

Military aircraft have been deployed to deliver relief supplies to isolated areas.

Victoria premier Dan Andrews said "satellite phones have now been dropped into a number of regions along with water and emergency supplies".

Adam Harris, captain of the Rural Fire Service in Sussex Inlet -- which was hit by the New Year's Eve blazes and remained under threat -- said there were not enough fire crews on the ground.

"Every resource is being used, that's the thing. There's so much fire on the ground that you've got to use every resource. We don't have enough trucks to be everywhere."

Conservative Prime Minister Scott Morrison -- who was pilloried for holidaying in Hawaii as the country was ablaze -- has come under renewed criticism for his handling of the crisis.

Visiting the hard-hit town of Cobargo, Morrison encountered a tearful young mother and a volunteer firefighter who both refused to shake his hand, before returning to his motorcade amid a volley of abuse.

"You won't be getting any votes down here, buddy," one resident yelled. "This is not fair. We are totally forgotten down here," another said.

"The feeling is bloody raw and it's raw for a reason," he added, underscoring that grieving communities now face the prospect of again being without electricity or communications.

"People are frustrated. People have suffered great loss. They're feeling very raw," Morrison said. "I understand how people are feeling and however they wish to respond is a matter for them."

"I don't take it personally."

With no sign of let-up in the fires, Morrison said he was "inclined not to proceed" with a visit to India in nine days' time.

The crisis has also touched cities like Sydney and Melbourne, home to several million people.

The blazes on Friday again shrouded Melbourne and Australia's capital in smoke, forcing the Canberra International tennis tournament to be relocated.

Authorities in Wellington said New Zealand would be sending a further 22 firefighters to Australia to help.