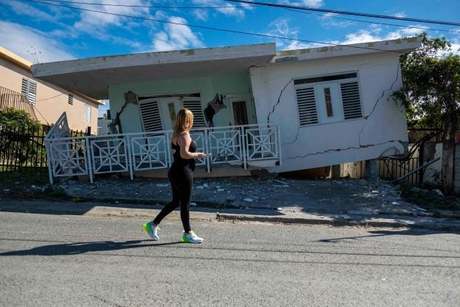 A strong earthquake struck off the south of Puerto Rico early Tuesday, the US Geological Survey said, the latest in a series of tremors that have shaken the island since December 28.

The shallow 6.5 magnitude quake struck 13.6 kilometers (8.5 miles) south of the city of Ponce, USGS said, revising down its initial reading of 6.6.

The quake struck just off the US territory's southern Caribbean coastline at 4:24 am local time (0824 GMT).

On social media, people in Puerto Rico wrote of being shaken awake by the force of the quake.

One woman on Twitter said she had been "wrenched from sleep", adding "Everybody is awake & scared all over."

An alert issued by the Tsunami Warning Center immediately following the earthquake was later cancelled.

Tuesday's quake was the strongest of a series of tremors that have shaken the island since December 28, topping Monday's 5.8 quake.

That earthquake toppled houses and caused power outages, but there were no reports of casualties.