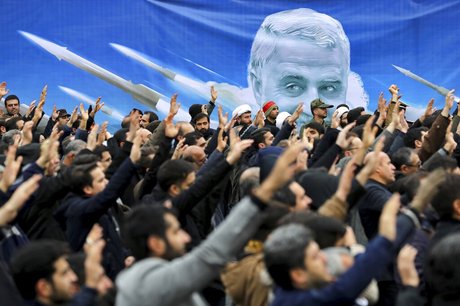 Portraits of Qasem Soleimani have been carried aloft in rallies from Gaza to Yemen, raising the prospect that his violent death will elevate him as an icon of anti-American resistance.

The powerful Iranian commander, who was buried on Wednesday, was hailed as a "living martyr" in the Islamic republic for his military and strategic exploits that included halting the Islamic State group as it rampaged across Iraq and Syria.

After his assassination at the age of 62, in a U.S drone strike in Baghdad, some observers say his martyr status will grow, rendering him a figurehead for the disparate pro-Iranian groups that he guided and fostered.

"The shock factor isn't so much that Soleimani has died -- he was after all in many battles -- but the way the U.S. president has taken ownership of this will create that type of zeal and drive and commitment across the Middle East," said Ellie Geranmayeh from the European Council on Foreign Relations.

Soleimani was a polarizing figure, even within his own country, and pro-Iranian forces have their own agendas and strategies, but the dramatic nature of his death could serve as a unifying force.

The so-called Iranian "axis of resistance" stretching from Iran to the Mediterranean Sea will be "galvanized to focus more on their ultimate goal which is the U.S. withdrawal from as much of the Middle East as possible," Geranmayeh told AFP.

The outpouring of emotion over Soleimani's death saw mourners pack the streets of Tehran on Monday. The following day tragedy struck in his hometown, with more than 50 people killed in a stampede during a massive funeral procession.

On social media, supporters have posted illustrations of the slain commander being greeted in heaven.

And elsewhere among Muslim Shiite communities, where Soleimani was seen as a champion in the face of Sunni aggression, there were expressions of grief, anger and resolve.

"The blood of the martyrs... is not just Iranian or Iraqi but belongs to the Muslim community and to free men around the world," said a Huthi official in Sanaa, the Yemeni capital held by the Iran-backed militia.

At a mourning ceremony in the Gaza Strip Soleimani was eulogized by the militant Palestinian movement Islamic Jihad.

In Lebanon his image was raised along a highway leading to the airport and in several Hizbullah strongholds.

Inside the Beirut airport, black-clad women arriving from the Iraqi shrine city of Najaf carried his portraits as they walked through the arrivals hall, chanting "death to America" in scenes that went viral.

"Soleimani was the most important and influential military commander in the 'axis of resistance.' He has invested his whole life, since his youth in deterring the region's neo-imperialists," said Lokman, a 22-year-old Lebanese graduate.

"I believe his assassination has revived the collective consciousness of tens of millions of people in the region, prompting them to stand up against the oppression and exploitation of the United States and its proxies."

In Iran, Soleimani was widely regarded as a hero for his staunch defense of the country, his defeat of the IS jihadist group, and his role in the grinding 1980s conflict between Iran and Iraq.

In recent years he stepped out of the shadows and became an unlikely celebrity in Iran -- replete with a huge following on Instagram.

As his influence rose and calls for him to enter politics grew louder, he was admired for his insistence on remaining on the battlefield.

Since his death, Soleimani has been hailed as the "Che Guevara of the Middle East" in some quarters, but the region's schisms and fractures present a much more complex picture.

"They're packaging Soleimani as this foreign policy guru, martyr, strategist... away from the narrative that he was a terrorist and responsible for loss of life," said Sanam Vakil from the London-based Chatham House.

"It looks useful (for Iran) right now but we don't know how durable it is," she said. "Depending on where you live and your world view you'll see Soleimani in one way or another."

In the northern Syrian city of Aleppo, hundreds took to the streets Tuesday to condemn the killing, holding aloft pictures of the general and those slain alongside him, and burning American and Israeli flags.

"We are all Qasem Soleimani," one demonstrator told AFP.

The Syrian opposition and Aleppo's displaced residents however accuse Soleimani of masterminding a brutal siege and ensuing military campaign that killed hundreds and displaced thousands of the city's residents.

In the jihadist-held province of Idlib, they distributed sweets to celebrate his assassination.