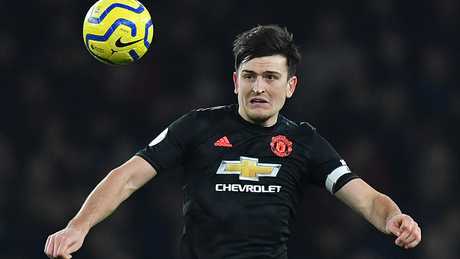 Manchester United defender Harry Maguire could be sidelined for several weeks with a hip injury, according to British media reports on Wednesday.

Maguire missed United's 3-1 defeat against Manchester City in the League Cup semi-final first leg on Tuesday as a result of the problem.

It was originally thought Maguire's injury was a foot problem sustained in the goalless FA Cup third round draw at Wolves last Saturday.

There has been no official confirmation from United on a likely return date for the England international.

But Maguire, who joined United from Leicester last year, is not expected to feature in Saturday's Premier League match against Norwich.

Given United's key run of fixtures coming up, which includes a trip to Premier League leaders Liverpool on January 19, an extended absence for the £80 million center-back would represent a significant blow for boss Ole Gunnar Solskjaer.

When addressing the issue following the defeat by City, Solskjaer had been optimistic Maguire would not be out for long, but it appears that is no longer the case.

"We don't know (about Maguire). He's not going to be long term, but I don't think he'll be ready for the weekend, but let's see," Solskjaer said.