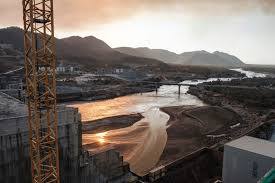 Ethiopia and Egypt failed to resolve a long-running dispute over a massive dam being built on the Blue Nile River during the latest round of talks this week.

Officials said Thursday that some progress had been made, though they remained at odds over major sticking points, including how fast the dam's reservoir would be filled.

The Grand Ethiopian Renaissance Dam has been a source of tension ever since Ethiopia broke ground on the project in 2011.

Ethiopia says the electricity the dam will provide is essential for its development.

But Egypt depends on the Nile for about 90 percent of its irrigation and drinking water and fears the dam could lead to acute water and food insecurity.

The talks that concluded Thursday in the Ethiopian capital Addis Ababa are part of a dialogue between Ethiopia, Egypt and Sudan that began in November and is supposed to yield an agreement next week.

"We looked at various issues on filling and operation. We converged on many points," Ethiopian Water Minister Seleshi Bekele told journalists.

"However, we couldn't finalize our agreement."

His Egyptian counterpart, Mohamed Abdel Aty, said the dialogue had brought "clarity" but no deal.

The biggest hurdle initially is filling the dam's reservoir, which can hold 74 billion cubic metres of water.

Ethiopia has said it would like to fill the reservoir over a period of four to seven years.

Seleshi on Thursday said Egypt this week submitted a new proposal in which the reservoir would be filled over a period of 12 to 21 years.

"This is not acceptable by any measure," he said.

Egyptian officials could not immediately be reached for comment Thursday evening.

The Nile River's two main tributaries -- the Blue and White Niles -- converge in the Sudanese capital Khartoum before flowing north through Egypt toward the Mediterranean Sea.

Cairo claims "historic rights" to the Nile, and the International Crisis Group warned last March that the countries "could be drawn into conflict" over the dam.

The United States stepped in last year to initiate the tripartite dialogue, setting a January 15 deadline to resolve the dispute.

The final meeting will take place next week in Washington.

If no deal is reached the three countries may seek mediation or refer the dispute to their heads of state.