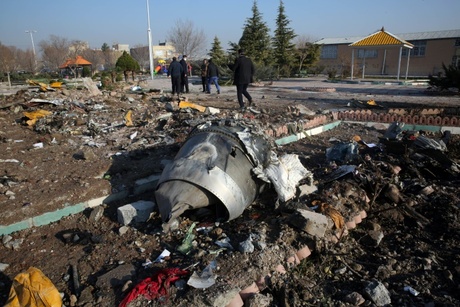 Iran's civil aviation chief Ali Abedzadeh said Friday he was "certain" a Ukrainian airliner which crashed outside Tehran this week was not hit by a missile.

"One thing is for certain, this airplane was not hit by a missile," Abedzadeh told a news conference in Tehran after Britain and Canada both said intelligence sources suggested a catastrophic error by Iranian air defence batteries had downed the aircraft.

"The information in the black boxes ... is crucial for the aviation organisation to make a statement," Abedzadeh said, adding that they were intact and under examination.

Dismissing allegations against Iran, he said that "any remarks made before the data is extracted ... is not an expert opinion."

The statements from Britain and Canada came as video footage emerged that appeared to show the moment the airliner was hit.

The footage, which The New York Times said it had verified, shows a fast-moving object rising to an angle into the sky before a flash is seen, which dims and then continues moving forward. Several seconds later an explosion is heard.

"We have seen some videos. We confirm that the airplane was on fire for 60 to 70 seconds," Abedzadeh said.

But "that it was hit by something cannot be scientifically correct," he added.

How can he be so certain the plane was not hit by a missile specifically when he mentions the black boxes are still under examinations!

lol @ the Shia christian of European parents from Dahieh and a deep and wide luv tunnel that is open for consensual penetration by the public year-round.