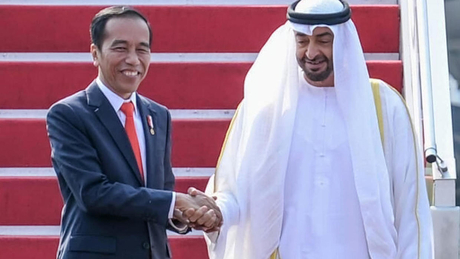 Indonesia and the United Arab Emirates have struck nearly $23 billion in business deals, including agreements in the energy sector and on infrastructure projects, the Southeast Asian nation said Monday.

The investments will be made through a new Indonesian sovereign wealth fund set to also involve Japan's Softbank and US International Development Finance Corporation, Jakarta said, without elaborating.

About $12.6 billion was linked to an agreement between Indonesia's state energy firm Pertamina and Abu Dhabi National Oil Company to develop a petrochemical plant in West Java, according to Indonesia's foreign ministry.

Other investments include deals in ports, renewable energy and agriculture.

Indonesia's leader has said he will focus his second term on luring more foreign investment to Southeast Asia's biggest economy and keep up a multi-billion-dollar infrastructure drive.

Jakarta said the agreements could include investment in Indonesia's planned new capital on the island of Borneo as it moves away from congested Jakarta -- one of the fastest sinking cities on Earth.

Zayed was asked to be an advisor for the development of the new capital, said Coordinating Minister for Maritime Affairs and Investment Luhut Pandjaitan.