Hariri Lashes Out at Sayyed in War of Tweets 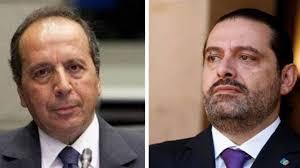 “To Jamil al-Sayyed, the genius in economy, assassination, lying, fraud and deceit, the best thing for you is to shut up after you stole, looted and imported explosives with your friend (Michel Samaha). Don’t utter a single word,” Hariri tweeted.

Earlier, Sayyed charged that Salameh had given BankMed -- a Lebanese bank in which Hariri had shares -- “$400 million from the people’s money in order to rescue it from bankruptcy.”

Sayyed also accused Salameh of “covering up for Bank Audi to give a loan worth $350 million to (the businessman) Alaa al-Khawaja” to allegedly allow him to buy Hariri’s shares in BankMed.

“It is normal for you to protect him and protect other corrupts, but the people are not stupid and the day of accountability is coming,” Sayyed added.

Yeah.. but no. Those 2 are not in the same category.
Sayyed is an assasin and a traitor. He is skletor material...