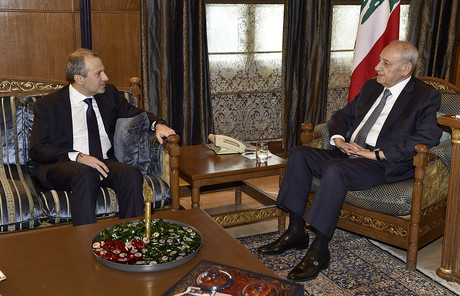 Speaker Nabih Berri and caretaker Foreign Minister Jebran Bassil will likely meet soon reportedly to resolve a new setback that delayed the formation of a new government that was expected to be announced this week, al-Joumhouria daily reported on Friday.

The daily said the two men will meet to “provide a solution (for the hurdle) after which it will be informed to PM-designate Hassan Diab, who in turn will act on its basis and meet with President Michel Aoun to decide on the subsequent constitutional stages and issue government decrees.”

Efforts to form a new government suffered a new setback Thursday evening, after optimism surged in the wake of a meeting between Berri and Diab.

The last-minute snags were reportedly related to the ministerial shares of the Marada Movement of Sleiman Franjieh and MP Talal Arslan.

but it was supposed to be a government of independents, experts, and technocrats of no political affiliation?!

Well... all those so called politicians cannot accept the fact that they will suddenly all be out of business... thugs!

A bloody Sunday and a Monday in hell... where is Michel Hayek? let him give us his opinion in the coming government!

They deserve nothing but death by lethal injection along with blablablablabla the lowlife who reports comments and sits all day playing with himself and soliciting online business for his love tunnel.

These two are who the protestors are targeting as corrupt and they are picking their guys for the government. The government if formed, won't last and probably won't be formed. Same cards--deck is shuffled.