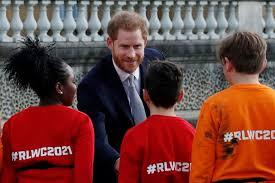 Prince Harry kept silent on Thursday about the shock decision he and his wife took last week to quit as full-time royals at his first public appearance since the bombshell announcement.

Harry, 35, took part in the draw for the 2021 Rugby League World Cup in an engagement at Buckingham Palace in London, planned long before he and Meghan triggered the still-unresolved royal crisis.

He appeared relaxed and jovial despite the tumult surrounding him, with final decisions on the Duke and Duchess of Sussex's future due within days.

After struggling in the spotlight, the couple said they wanted to step back as senior royals and split their time between Britain and Canada.

They also said they wanted to become financially independent from official royal funding and pull out of the palace's media arrangements.

They made the announcement unilaterally on a new website -- without first checking with Harry's grandmother, Queen Elizabeth II.

Heading inside after meeting schoolchildren playing rugby on the lawns of the queen's official London residence, he said: "Look after the grass though, yeah? Otherwise I'll get in trouble."

A reporter shouted out: "How are the discussions going on your future?" but Harry did not reply nor did he say anything on the crisis during the competition draw.

He got a laugh as he turned his back to stir the mini-rugby balls with the participating countries' names inside.

A jocular Harry then pretended to stir them as if with a spoon, stopped and said: "This is not a cooking show."

A December photograph of the queen with Harry's father Prince Charles, brother Prince William and nephew Prince George -- the next three in line to the throne -- stirring Christmas puddings at Buckingham Palace was reportedly a factor that led to Harry feeling edged out of the institution's future.

Harry is patron of the Rugby Football League, the sport's governing body in England.

"Not only do I continue to see sport actually changing lives, but it's saving lives as well," he said.

Jon Dutton, chief executive of the 16-team tournament, hoped Harry's reduced role in the royal engagements would not affect his involvement with the World Cup, which takes place in October and November next year.

"What happens next is for other people," he told Sky News television.

"He's made a commitment to the sport and to the event and we very much hope to see him in the future. What that role is, it's probably too early to say."

Harry was summoned to a hastily arranged family meeting on Monday with his grandmother, Charles and William to thrash out a way forward.

They said they would have preferred the Sussexes to remain as full-time royals but respected their wish for a more independent life.

The final details of their new roles are set to be determined in the coming days.

Harry and Meghan spent six weeks over Christmas on Vancouver Island on Canada's Pacific west coast -- the duchess has already returned after briefly coming back to Britain.

The couple's son Archie, born in May last year, had stayed in Canada.

Meghan, a 38-year-old US former television actress, visited two women's charities in Vancouver on Tuesday, one proving support to women fleeing violence and another which helps teenage girls living in poverty.

Harry is set to remain in Britain for meetings early next week.

Queen Elizabeth, 93, is Canada's head of state and Harry is therefore sixth in line to succeed her in that role.

Despite Canadians' affection for the royal couple, who married at Windsor Castle in May 2018, a large majority (73 percent) do not wish to foot security or other costs for their relocation, according to polling firm Angus Reid Institute.

Besides the ructions in the royal family, Meghan could face yet more upheaval -- potentially facing her estranged father Thomas Markle in court.

He showed the Mail on Sunday an August 2018 handwritten letter to him from his daughter, which the tabloid published extracts of in February last year.

The letter shed light on their troubled relationship, which broke down around the wedding.

Meghan filed a claim in October against publishers Associated Newspapers over the alleged misuse of private information, infringement of copyright and breach of the Data Protection Act 2018.

Defense documents suggest Meghan and her father could end up testifying on opposite sides in the High Court.

Meghan's estranged half-sister Samantha Markle told the BBC: "If he is called, he will come."