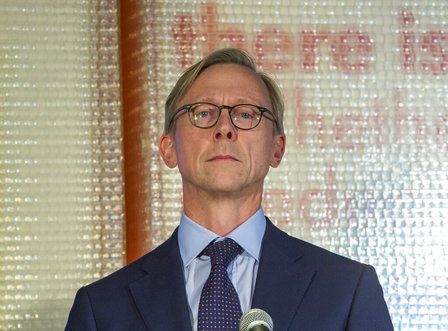 Brian Hook, the U.S. special representative for Iran, said Friday that the United States was "very pleased" with the UK’s decision to add the entire Hizbullah group to its list of terrorist organizations subject to asset freezing, adding that Washington had long been seeking such a move from European allies.

"We would like to congratulate the United Kingdom," he told reporters in Washington. "There is no distinction between Hizbullah's political arm and its military arm," Hook added.

The change requires any individual or institution in Britain with accounts or financial services connected to Hizbullah to suspend them or face prosecution.

The group had "publicly denied a distinction between its military and political wings," the British Treasury said in a notice posted on its website.

"The group in its entirety is assessed to be concerned in terrorism and was proscribed as a terrorist organization in the UK in March 2019," it added.

"This listing includes the Military Wing, the Jihad Council and all units reporting to it, including the External Security Organization," it said.

Nonsense--not a language. Pick a language and a stance and stick with it.

You are responding to an approved site troll Samiam "he no sbeak de ingrish well".
Waste of time same old Iranian propaganda and yes death to the infadels...

USA and UK after exterminated the ancient cristhians communities in Iraque because the insane policies that they have to the region, can call anyone terrorist!!!??? Pure insanitie of the anglo-saxons