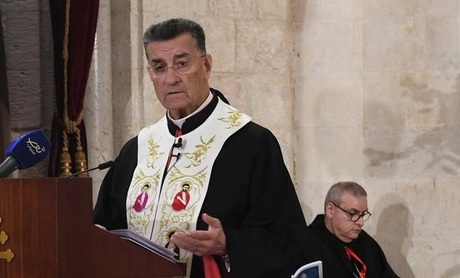 “The government was not formed this week because, as everyone knows, the obstructors have returned to the approach of splitting shares, which means a return to the previous situation,” al-Rahi said.

“Their behavior obliges our young men and women to remain on the streets and in the squares despite their sacrifices and suffering,” the patriarch added.

“I call them Lebanon’s enemies,” he added.

Al-Rahi also suggested that “those obstructing are the same ones who sent infiltrators to carry out acts of rioting, vandalize a number of public institutions and banks, and attack public and private property.”

“These people do not want the state of Lebanon nor the welfare of its people,” the patriarch added.

I don’t think Rahi understands the definition of ‘secular’ when the people in the street demand a secular government made of competent and honest people which is everything we won’t be getting.

Dudes.. what's with the bib.. was he eating lobster?..