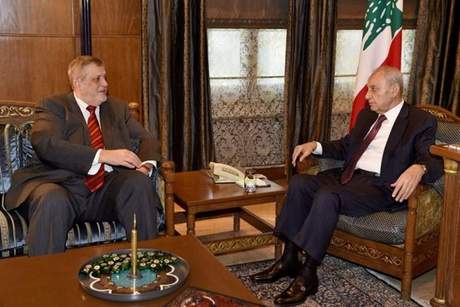 Speaker Nabih Berri considered the latest tweets of the top UN official in Lebanon as an “interference in Lebanon’s internal affairs,” al-Joumhouria daily reported on Saturday.

“With all due respect for all international delegates and representatives in Lebanon, the statement of (Jan) Kubis is an interference in Lebanon’s internal affairs and is not acceptable, not in form nor in content,” Berri was quoted as telling his visitors.

Jan Kubis, U.N. special coordinator for Lebanon, on Wednesday denounced in a tweet acts of vandalism by protesters targeting the country's banks a day earlier. But Kubis criticized the political class' management of the country's deepening economic crisis, saying those responsible for handling it “are watching it collapse. Incredible.”

Also on Friday, Kubis commented on the “use of force” against protesters and journalists after meeting caretaker Interior Minister Raya el Hassan.

“Excessive use of force against protesters is unacceptable, action must be taken also to prevent future excesses,” he said in a tweet adding that “anger of the people is understandable, but it is different from vandalism of political manipulators, that must be stopped.”

Surely the very fact that Speaker Berri is discussing this matter of a government of technocrats, and it makes no difference who with, shows his blatent political interference in what was intended to be both a non-political and a non-politically influenced government.

He called the politicians out---they are simply too think skinned to take any sort of criticism.

When you go begging for money from them, then they have the right to interfere.

I understand Kubis is demanding the equivalent of a Lebanese legislator's pay and benefits package to continue his searching critique of Lebanese affairs, but the parliamentary budget committee has said that that particular cookie jar has run dry.

“With all due respect for all international delegates and representatives in Lebanon, the statement of (Jan) Kubis is an interference in Lebanon’s internal affairs and is not acceptable, not in form nor in content,”

what a nice hypocrit... when iran does the same and comments on lebanese revolution we never hear him say that!

YUP these ratings are just for the top two most corrupt.... the least corrupt comes in at about 20!!!

Your house is In glass so do not open your mouth and talk about who interfere with who..