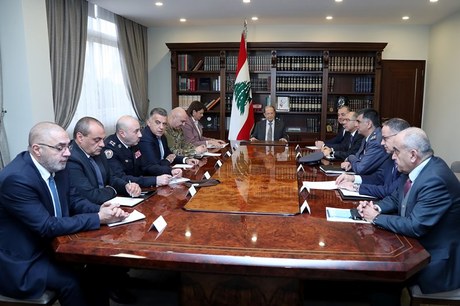 Lebanon's top security officials said on Monday that they planned to crackdown on vandalism after a week of rioting in Beirut that left hundreds of people injured and damaged public and private property -- violence that comes against the backdrop of a deepening political deadlock.

The announcement followed a presidential palace meeting that included President Michel Aoun, the caretaker interior and defense ministers and the chiefs of security agencies. The officials called for more coordination among the Lebanese security agencies to better deal with the unrest.

Lebanon has been roiled by three months of largely peaceful anti-government protests that over the past week turned into acts of vandalism in different parts of Beirut.

On Saturday and Sunday night demonstrators, who had called for a "week of rage", lobbed stones, firecrackers and street signs at riot police, who fired tear gas and rubber bullets to clear a road leading to parliament.

Officials who took part in the security meeting said they would take measures to protect peaceful protesters and prevent attacks on public or private property, the statement said. It added that they would also move to "deter groups that are carrying acts of sabotage," without elaborating further.

Saturday witnessed the worst rioting since the protests began, with nearly 400 people injured, including around 120 who were treated in hospital. On Sunday, more than a 100 people were injured in downtown Beirut.

The protesters have also attacked public and private property in Beirut, targeting mostly banks that have imposed informal capital controls, limiting the withdrawal of dollars and foreign transfers.

In a show of defiance, demonstrators who said they took part in the weekend protests responded online using the Arabic hashtag "The Infiltrator Is Me", disclosing their full personal details.

They also accused security forces of firing rubber bullets at the eyes of protesters in other Twitter posts, as rights groups and the U.N. criticized police over the crackdown.

Cutest photo ever. He must have taken it for his profile on match.com

Nope, it was Grindr.

Screw you, Mr. President, you and your son in law that brought you more shame than glory and a lot more insults from your core supporters than from those that followed later in hope of filling their pockets with the people's money!

Thank God people are realizing you're a POS and are heading now to ousting you from the presidency!

Maybe he should be addressing the cause of anger instead of its results, at least that would be what a wise man would do. I am guess his actions would not be the mark of that type of man.

Soon, people will get mugged in every street by starving people. Homes will get robbed... insecurity will be the new norm. This violence in Beirut is just a warning...

does that include the shia?