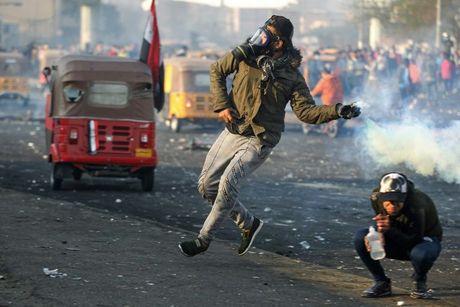 Three Iraqi protesters were killed in the capital as thousands of anti-government demonstrators sought to shut streets across the country on Monday, their deadline for authorities to implement long-awaited reforms.

Rallies have rocked Iraq since October but fearing they would lose momentum amid spiraling regional tensions protesters last Monday told the government it had one week to meet their demands or they would escalate their demonstrations.

Protesters sought to ramp up pressure on the government on Monday with pop-up rallies away from their main gathering place in Baghdad's iconic Tahrir (Liberation) Square.

Hundreds descended on nearby Tayaran Square, where they clashed with security forces who fired tear gas and live rounds to disperse them, an AFP journalist said.

Three protesters were killed, medics told AFP, two of them by live rounds and the third by a tear gas canister that pierced his neck.

More than 50 other people were wounded, the medics said.

Young men wearing helmets and gas masks in an attempt to protect themselves from flying gas canisters erected barricades to try to push riot police back.

Protesters have called for early elections under a new voting law, an independent prime minister to replace outgoing premier Adel Abdel Mahdi and for all corrupt officials to be held accountable.

They tried to do the same early Monday in the capital but security forces acted fast, with the military saying it had reopened a major Baghdad thoroughfare and arrested nine young men who had attempted to seal it off.

But young people hit the streets in the southern cities of Kut, Nasiriyah, Baqubah, Amara and the holy city of Najaf, setting tires on fire.

In the protest hotspot of Diwaniyah, they shut key roads both inside and leading out of the city.

"The procrastination of the government and the political class for more than three months now has prompted us to take escalatory steps to pressure them to meet our demands," Mohammad Faeq, a 28-year-old protester, told AFP.

Since October, around 460 people have lost their lives to protest-related violence and another 25,000 have been wounded, according to an AFP count.

Demonstrators have feared their movement would be eclipsed by the geopolitical storm brewing between neighboring Iran and the United States, both close partners of Iraq.

Iraqi political figures have since ramped up their calls for foreign forces -- including some 5,200 US troops -- to leave the country.

On Monday, the United Nations' top official in Iraq Jeanine Hennis-Plasschaert said ignoring the demands of protesters would only fuel "anger and distrust".

"Any steps taken so far to address the people's concerns will remain hollow, if they are not completed," she said in a statement.

Protesters also worry that a mass rally to be organised Friday by firebrand Shiite cleric Moqtada Sadr to demand the ouster of U.S. troops could drown them out.

Last week, Sadr urged Iraqis to hold "a million-strong, peaceful, unified demonstration to condemn the American presence and its violations.".

While protesters have criticized the U.S., they have directly accused Iran of hindering Iraq politically and economically.

Tehran holds major sway in Iraq, building up close ties with a variety of political and military players over decades.

The World Bank says one in five people lives below the poverty line in Iraq, which is OPEC's second-biggest crude producer.

While the rallies initially railed against the economy, they quickly escalated to demand a total overhaul of government.

Protesters scored one win in December with the resignation of Abdel Mahdi but he has stayed on in a caretaker role and political parties have thus far failed to agree on a successor.

Demonstrators have publicly rejected names circulating as possible replacements and are furious that other sweeping reforms have not been implemented.