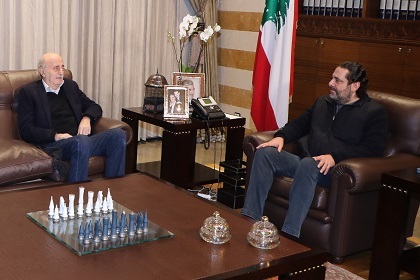 “We will always support this house,” Jumblat said after the meeting, recalling his support for slain ex-PM Rafik Hariri.

Addressing what he called the “new protest movement,” Jumblat added: “Violence is not useful… and my words and PM Saad Hariri’s words about Beirut are not in defense of Beirut’s stones but rather in defense of only Beirut’s people.”

Noting that most of those who protested in central Beirut on Saturday and Sunday “came from the North,” the PSP leader suggested granting Russia a contract to reactivate Tripoli’s oil refinery.

“Oil would come from Kirkuk or from Turkey via Syria. I don’t think that the Syrians can object, seeing as the Russians are in control of those regions, and we would generate income for the Lebanese and the residents of the North,” Jumblat went on to say.

As for the stalled formation of a new government, the PSP leader said: “What’s laughable about this government is that there were so-called national unity governments in the past when they invented the one-third veto power (in Cabinet), while today there will be a one-sided government and they are at odds among each other.”

Asked whether he and Hariri will “facilitate the work” of the new government, Jumblat said: “Everything happens in due time. We will coordinate together day by day and week by week.”

So much respect for their voters... jeans, no ties... Lebanon is burning but they’re relaxed because they funneled their illicitly acquired money abroad.

Are you surprised? they are behaving as of nothing is happening in the Country. The silver lining in all of this the sheep that support them are waking up so if they keep this up all the sheep will have awoken from the deep sleep....

"Jumblat Meets Hariri, Tells Protesters Violence Not Useful" - neither is a corrupt government. Something has to give.