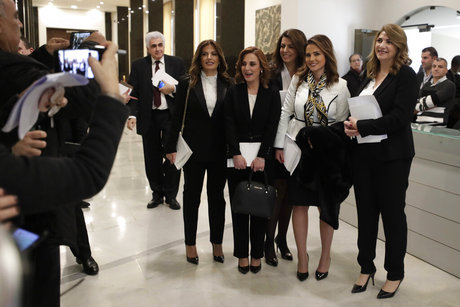 Lebanon's new prime minister claims to lead a government of technocrats but critics argue the line-up is window dressing for a set of ministers who are neither experts nor independent.

Hassan Diab insisted the list of 20 ministers unveiled Tuesday night represented the demands of protesters who first took to the streets three months ago to demand change.

But protesters reacted angrily to the line-up, arguing it fell short of a clean break from the sectarian-driven way of apportioning government jobs that has characterized Lebanese politics for decades.

A self-proclaimed technocrat, the 61-year-old Diab is a university professor but also a former education minister who owes his political appointments to Hizbullah.

Before his cabinet was even formed, many protesters rejected him as a pawn of the parties they want removed from the political landscape.

The cabinet brought many new faces but the month-long political bargaining that led to Tuesday's announcement fueled deep-rooted suspicion that behind every technocrat is a party clinging to its share of influence and patronage.

A closer look at the line-up confirmed that, with some exceptions, the government is nothing but another product of Lebanon's age-old political pie-slicing game.

"Despite the presence of a few genuinely independent and reformist figures, the cooks who whipped up this government are the usual suspects," said Karim Bitar, a professor of international relations in Paris and Beirut.

Jebran Bassil, President Michel Aoun's son-in-law and arguably the politician most reviled by the protest camp, hands over the foreign ministry to Nassif Hitti, a respected career diplomat.

But many of the new ministers are close to the stalwarts of Lebanon's hereditary ruling elite and will have little room for maneuver.

"It feels as if the Lebanese political class wanted to show something more palatable to the public and international community," Bitar said.

"But there has been no in-depth change, just a bit of window dressing," he said.

The newly appointed minister of public works, Michel Najjar, made no secret of his political debt.

His first words were to thank not the prime minister but his sponsor Suleiman Franjieh for nominating him during government formation talks.

The Lebanese press published articles giving a breakdown of each new minister's friendships and allegiances, painting a picture of a government team that will have its hands tied at a time when drastic economic measures are needed.

MP Paula Yacoubian made it clear she felt "Diab did not keep his promise to form a government of independent" experts.

The independence of the new government was always in doubt in a country where the ruling elite is desperate to cling to its privileges, but some of the new ministers' expertise was also coming under scrutiny Wednesday.

When asked about the appointment of Zeina Akar -- a social scientist who runs a consultancy firm -- as defense minister, Diab fumbled his answer and questioned the need to have specialists for the job.

Last-minute horsetrading between Lebanon's factions combined with a drive to downsize the cabinet also led to unlikely ministerial mergers.

Social media was awash with wry comments and jokes on the appointment of Abbas Mortada, who has worked in hotel management and real estate, as the minister in charge of both culture and agriculture.

His name was put forward by the AMAL Movement.

After a three-month vacuum, a new government was eagerly awaited, at home and by Lebanon's donors, but fears are already high that it will not be in a position to deliver radical reforms needed to save the near-bankrupt country.

Maha Yahya, the director of the Carnegie Middle East Centre, said a fully independent government of the country's brightest minds was the protest movement's pipe dream.

"Ideally what you would have needed at this point in time, is a consensus by all political parties to allow an independent government to do its work and stabilize the country, prioritizing the economy over the politics," she said.

"That didn't happen," she said.

The real joke is the minister of defense!

the defense minister does not have a phd in pharmacy?! She has a degree in sociology. Her husband owns a company that conducts surveys and polls. He is a friend of Bassil/Aoun.

Therefore she will make an excellent defense minister.

lol, still irrelevant to the job.

But thanks for correcting me. I wouldn’t want to contribute to spreading fake news.

Even today you can buy your degree in Moscow!

And, we should have access to his grades. Lebanon doesn’t need tanebil, the situation requires the most brilliant minds.... basically none of those people.

They should all go visit the fish market at Wuhan, I heard it’s a great place and with the Chinese New Year , it’s the perfect opportunity. The entire government should go.

iran is winning its bet to create a iranian belt from iran to lebanon, if the price is the collapse of irak and lebanon they do not care as long as their imperialist ambitions are met....and with the complicity of christian parties... waw!