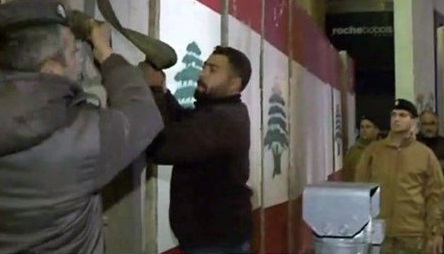 Cement security walls were on Thursday erected at the entrances to the street leading to the Lebanese parliament in central Beirut, the site of recent clashes.

The blast walls, some painted with Lebanese flags, were installed as security forces guarded the area.

Dozens of protesters gathered in the area as the walls were being erected on Thursday. They objected to the move and some of them sat on the ground before being removed by riot police.

The small rally has however remained peaceful, in contrast to the fierce clashes of the recent days.

Over the weekend, Beirut saw some of the most violent clashes between protesters and security forces yet. More than 500 people, including over 100 security forces, were injured in clashes outside the parliament building. Protesters hurled stones, firecrackers and flares at security forces who responded with rubber bullets, tear gas and water cannon. Several protesters were hit in their eyes.

On Wednesday, hours after the new government held its first meeting, hundreds of protesters gathered again outside parliament, attempting to break through security barriers and hurling stones, firecrackers, tree branches and Molotov cocktails. Clashes lasted late into the night, as security forces chased protesters down the streets.

A parliament that barricades itself is an illegitimate parliament.

This being said, they’re erecting walls like israel in Palestine and Trump on the Mexican border... bunch of hypocrites.

it says it all... build a wall between the politicians and the people. it is the symbol of how politicians see the dialogue between themselves and its people.